Fighting Poverty with Education in Guinée

on June 20, 2012
This event happened last weekend but the cause is still worth mentioning:

NEW YORK CITY - Music and the arts lit up this fund- and awareness-raising event at Columbia University last Friday night.

The arts punctuated speeches and speakers from organizers of Action Guinée and PromoGuinée, who included a representative of that nation's ambassador to the U.N. as well as event organizers. The talks emphasized ending the ethnic divisions that still plague politics in the West African country and focusing on education for the younger generation.

The stats are sobering. In a country rich in resources like gold, diamonds and bauxite - a key component of aluminum and Guinée is the world's largest source thereof - poverty is dragging down the new generation. Nearly 800.000 children are enrolled in school at the primary level, dropping to fewer than 130,000 at the secondary level and only 1.8% of that original 800K make it to the post-secondary level.

With government spending on education minimal, it results in overcrowded classrooms and a lack of teacher training, elements that are at the heart of efforts by Unicef as well as the two organizing NGOs 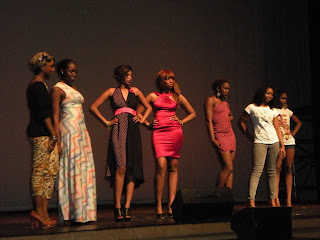 to revitalize the country economically and in many other ways as well. Action Guinée gives scholarships to worthy students with an inspiring success rate. Launched only in 2007, its first three secondary level graduates are pursuing post-secondary studies.

Naturally, it being a West African gathering, music and fashion were the highlights of the evening, with performances by Bailo Bah on flute and Famoro on balofon. Gallice Jr. added hip hop and rap to the mix, and a fashion show by budding designer Mariame Condé of Femme Progressive. The evening ended with a performance by noted star Sekouba Bambino Diabaté - and some dancing in the aisles.

PromoGuinée has offices in the U.S. and Canada as well as in Guinée.