TORONTO - Every minute counts! InspiraTO is back and it's bigger and better than ever. Canada's largest ten-minute play festival launches its 7th successful season June 1-10, 2012 at Toronto’s 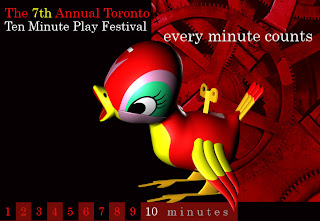 Alumnae Theatre. InspiraTO 2012 is primed to produce its largest collection of plays to date: 24 fascinating and provocative ten-minute plays, created and brought to life by an incredibly talented slate of up-and-coming emerging artists. Tickets are only $12 each ($38 for the 4-show Festival Pass) available via TicketPeak or at the Alumnae Theatre Box Office one hour before each show.

InspiraTO's theme this year is VISION – explored through a series of 4 shows (6 ten-minute plays per show) each with their own unique perspective. The redEye show: Visions with passion - plays that deal with our deep longings, and push our idea of obsession and desire. The yellowEye show: Visions that alert - plays that challenge the status quo, re-examine the way we live, and challenge our world view. The blueEye show:  Visions with mystery - plays that make you think, and don't give you black and white answers.  The whiteEye show: New voices - showcasing plays from InspiraTO's Playwrights' Mentoring Project.  InspiraTO 2012 also features a series of fascinating after-show Talkbacks for all four series.

Each year, the InspiraTO Festival showcases the best ten-minute plays, as selected by a jury of experienced actors, directors, producers and other members of the theatrical community. For the 2012 Festival there were 311 submissions from Canada and around the world. Once the plays are on stage, your opinions become a key element of the InspiraTO Festival – audiences vote for their favourite plays and the top two from each colour group are showcased at the final Sunday matinee performance (June 10).

Returning to InspiraTO this year is the Ten Day Playwriting Contest, which offers audience members the opportunity to write their own ten-minute play over the ten days of the Festival. The play must be on the theme of Vision, along with two elements which will be only be revealed when the contest opens at the start of the Festival. The winning audience playwright will receive a $250 prize plus a staged reading of their work during the final performance on June 10.

Dedicated to producing high quality short plays and making theatre more accessible for both artists and audiences, the InspiraTO Festival was launched in 2006 by founding Artistic Director Dominik Loncar. In 2008, Lumir Hladik joined the Festival as Associate Artistic Director to create a unified set design and lend his visual arts expertise. Since 2010 InspiraTO has been proud to partner with Pat the Dog, Ontario's playwright centre, helping emerging and established playwrights across the province. In its seven seasons the InspiraTO Festival has produced 82 original ten-minute plays, showcasing over 190 actors and 80 directors. For more information about InspiraTO and this year's plays, please visit www.inspiratofestival.com.

"The range of talent was astonishing! Each ten-minute play was a wonderful slice of theatre, bursting with all the energy and heart of a full-length play." ~Ann McDougall