Composer and pianist Amina Figarova's 12th album, titled Twelve - her debut release on the renowned independent German label In + Out - celebrates jazz is an international music and New York City as a locale where jazz gypsies may feel most at home.  A suite of songs for sextet Figarova wrote swiftly in 2011 after moving with her husband and musical partner, flutist Bart Platteau, to Forest Hills, Queens from their longtime European base, Twelve is suffused with the heightened expectations, sense of adventure and fresh perceptions that voluntary emigrés enjoy, as well as the confidence, 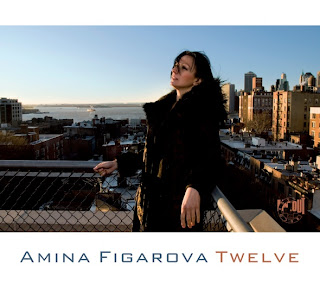 creative energies and nuanced fulfillment that artists gain from being in the right place at the right time.  Figarova recently toured to twelve US cities to support the CD.

Amina was born and raised in Baku, Azerbaijan, Bart is from Belgium, and together they are citizens of the world. They've toured extensively, developing a tight-knit ensemble that, despite inevitable personnel changes, has attained a distinctive and inimitable voice by concentrating on all-original repertoire for almost 18 years. During that period, Figarova and Platteau have lived in Rotterdam, which they found to be a comfortable if not overly challenging launching pad for their careers. Having collaborated with musicians residing in both the U.S. and Europe and having built up a circuit of welcoming venues by taking it one gig at a time, the Amina Figarova Sextet has triumphed at the main stage of the Newport Jazz Festival, been invited repeatedly to New Orleans Jazz and Heritage Festival, won critical and audience acclaim in Chicago, Detroit, Paris, Amsterdam - and of course New York. In 2010 they decided to make the daring, big move to the States, and having arrived, they couldn't be happier.

"I feel so in balance," says Amina. "Every little thing makes more sense." Her awareness of life in focus is evident throughout Twelve, as her themes and backing arrangements for the complementary yet highly personalized extrapolations of Bart and also tenor/soprano saxophonist Marc Mommaas, trumpeter Ernie Hammes, bassist Jeroen Vierdag and drummer Chris "Buckshot" Strik depict subtleties of her response to the great American metropolis. From "NYCST", a tone poem about the anything-can-happen experience of late night "subway tangos" to "Maria's Request," a bass-piano-flute trio of exquisitely tender intimacy, Amina's pieces strike a perfect tone, employing genuinely beautiful harmonizations, to capture fleeting thoughts that accompany those precious moments when the puzzling jostle of daily existence comes into unexpected but deeply satisfying sync.

Much of the sparkle and also substance of Twelve comes from Amina's piano playing. Her touch is wonderfully unforced, graceful and articulate, unhurried and sure. She doesn't go out of her way to bedazzle with technical display, though it is difficult to play as she does, making crisp, light finger-dancing seem easy. Bart Platteau is heard throughout Twelve as a master flutist, though he is modest 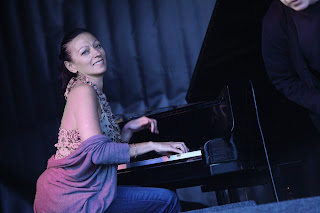 of demeanor, too, playing always for the remarkably rich yet transparent blend that he, Marc Mommaas and Ernie Hammes affect. All three are compelling soloists - Hammes has a splendid moment in "Another Side of the Ocean" when "My Favorite Things" seems right to quote; Mommaas is convincingly puckish on soprano evoking "Sneaky Seagulls" and forthright on tenor about what's required to win a place on the scene in "Make It Happen."

Amina has high regard for her bassist's acute ear and taste, mentioning that though Jeroen Vierdag does not compose, he should, having an unerring ability to hone in on seemingly small but decisive song elements that can bear adjustment. Chris Strik is the Sextet's best-kept secret - he, too, is unerring in choice of tempi, deployment of accents, ability to propel and has great taste regarding dynamics. For the Amina Figarova Sextet's front line to blend in full glory, with Amina's piano wafting through and the rhythm team acting as one even through tricky episodes and complicated beats, means that all the ensemble members must listen closely to each other. Which, happily, they do. 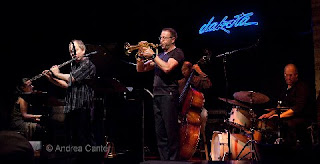 "It's always been difficult to keep the members of a jazz band together," Amina realizes. "It takes strength, stubbornness and sacrifice, some of which is financial. I'm very lucky to have this ensemble ready for whatever I put before them, because they understand my music, they are loyal and they each give what they do 100 percent."

The value of sustaining such a seasoned and sensitive sextet, for composer-bandleader and listener alike, becomes obvious when music of such intricacy and refinement as Amina Figarova's is heard.  We don't hear it as intricate or refined, we hear it as heartening, stimulating, resolute, inspiring and warm. We know it's hard to accomplish what this band does - as it's hard to live in New York, and hard to make jazz or any other form of creative music, dance and art anywhere. Firmly grounded, the Amina Figarova Sextet will keep moving, growing, evolving, engaging with listeners who are moved, perhaps, to eagerly anticipate Thirteen.