From a media release - I cried a little bit when I realized I'd booked my vacation trip to leave on the very day my favourite guitarist in the universe - Djelimady Tounkara - will be playing in Toronto. For free.

Luminato Pick:
AfroCubism, with Fatoumata Diawara: At the Hub, Tuesday, June 12, 2012
David Pecaut Square, Toronto
This is a free event

Born to Malian parents in the Ivory Coast, Fatoumata Diawara began her career as a stage and screen actress but has, as both singer and multiinstrumentalist, since become solely devoted to music, recording her debut album and contributing to various high-profile projects, including Herbie 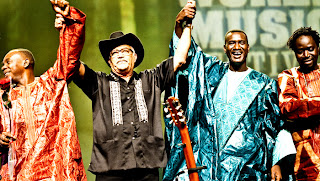 AfroCubism (9:00 PM)
In 1996, several of Mali’s finest musicians—including Bassekou Kouyate, Toumani Diabate, Kassey Mady Diabate and Djelimady Tounkara—were scheduled to visit Cuba to record an album with local music leaders. But the Malians never arrived and the Cubans recruited other musicians to partner with, resulting in the global phenomenon the Buena Vista Social Club. Fourteen years later, the album that never happened was finally realized when all of the original Malian invitees united with Cuban singer and guitarist Eliades Ochoa and his Grupo Patria to produce AfroCubism. Now, this remarkable musical ensemble, which rarely performs, makes its Toronto debut.