NEW YORK CITY - This special reggae concert and celebration is hosted by the Caribbean king of radio Dahved Levy of 107.5 WBLS.

Tiken Jah Fakoly is a premier artist and has often been called the Bob Marley of Africa.  He draws 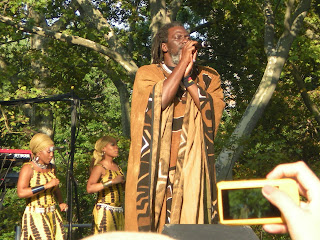 this comparison to the reggae legend for his soulful vocals, the revolutionary messages in his music, and his mastery of roots-reggae.  This world music star has sold out stadiums and venues all over Europe and Africa and will now make a rare trip to the United States for his first ever appearance on the legendary Apollo stage, where he will perform classics and material from his latest album, the critically acclaimed African Revolution.

The reggae group Cannabis Cup Band a favorite of world music fans in New York, Jamaica, Trinidad and the West Indies, will open this legendary concert. Since emerging in 1996 as the High Times Cannabis Cup house band, the CCB has been lighting up the underground New York reggae scene with sold-out performances at some of the city's hottest venues.