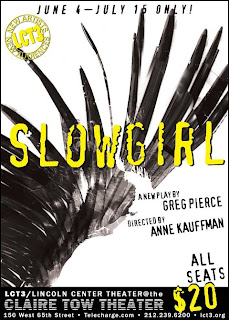 NEW YORK CITY - We are pleased to announce that the Claire Tow Theater will open June 4th 2012 with the LCT3 world premiere production of SLOWGIRL, by Greg Pierce, directed by Anne Kauffman.

SLOWGIRL is the story of a teenager (Sarah Steele) who flees to her reclusive uncle's (Željko Ivanek) retreat in the Costa Rican jungle to escape the aftermath of a horrific accident. The week they spend together forces them both to confront who they are as well as what it is they are running from.

Playwright Greg Pierce's first professional production, an adaptation of Haruki Murakami's The Wind-Up Bird Chronicle, which he co-authored, was seen at last year's Edinburgh International Festival. He is currently collaborating with composer John Kander, writing the book and lyrics for a new musical The Landing. SLOWGIRL will mark his New York debut.