Since 2004, Decadancetheatre has been challenging hip-hop’s male-dominated convention, by taking female dancers out of the background of music videos and into the forefront of theatrical performance. Decadancetheatre emerged on the hip-hop scene in 2004 with its acclaimed debut, 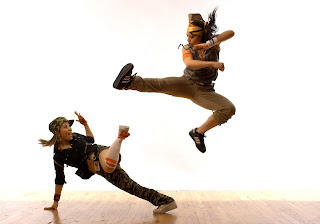 Decadance vs. The Firebird an urban re-imagination of Stravinsky’s famed 1910 ballet. A key ambassador of authentic, New York City hip-hop culture, the company represents a global vision of hip-hop featuring an international roster of dancers. Focusing on all elements, including breakdance, MCing, DJing and graffiti, Decadancetheatre translates the vibrant energy of street culture to the international stage.

Decadancetheatre presents an excerpt of their new work 4, set to Antonio Vivaldi’s violin concertos, “The Four Seasons.” In this new duet, the dancers embody the classical notes and find the hidden hip-hop rhythms within the 289 year-old classic.

Whitney V. Hunter is a Brooklyn-based performance and exhibition artist who creates and curates work for the stage, gallery, and alternative spaces. One of Trace Magazine’s “7 NYC Dancers on the Rise,” Hunter’s impressive resume spans the world of art, education and dance. He has worked with choreographers and companies such as Martha Clarke, Martha Graham, Reggie Wilson, Pascal Rioult, and at prestigious institutions including the Martha Graham School of Contemporary Dance, Peridance Center, The Ailey School and The Invisible Dog Art Center.

Watch Hunter take the stage with the world premiere of his new performance collective, Whitney Hunter[medium] in the NY premiere of Site.  Site, set to a entrancing score of collected sounds from field recordings, Orisha music, contemporary blues and hip hop, is a work of action and process, and an investigation into the ritualistic bonding of 6 males. 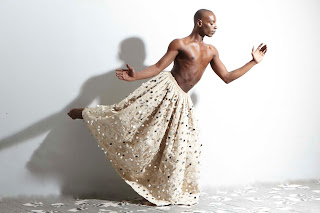 Germaul Barnes/Viewsic Expressions Dance was formed in 1993 by Bessie Award winner, Germaul Barnes. The company has gained world renowned attention, performing across the U.S. and at major international festivals, showcasing its style of contemporary dance that fuses a broad range of movements: athletic, gestural and theatrical. The New York Times has claimed that Barnes, “[has] a stage presence that [is] both larger than life and casual.” Barnes has infused this vitality into the company. With a commitment to live music, which is a feature of every performance on its international touring schedule, the company collaborates with leading orchestras, opera companies and musicians such as GRAMMY® award winning pianist and composer, Paul Sullivan among numerous others.

The Restoration Dance Theatre Company (RDTC) members are ambassadors for the Bedford Stuyvesant Restoration Corporation Center for Arts and Culture’s Youth Arts Academy Dance Department. The company receives professional training, attends master classes, and participates in the ChoreoQuest mentorship project working with artistic directors and/or choreographers. RDTC has an eclectic repertoire grounded in African, ballet, modern and jazz and performs throughout the tri-state area, and is showcased annually at Brooklyn Academy of Music’s, DanceAfrica! with visiting companies from the African diaspora. The ChoreoQuest troupe will perform a special dedication to the