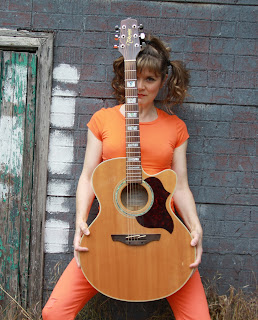 Modern Attitudes is pleased to present: Annabelle’s Tails from Jail!

Annabelle is a white trash alt country singer/guitar player who finds herself in jail on „excusable‟ homicide charges. She tells her story about jail life, family life and life with The Biter - the man who got away – almost - through singing and talking with the audience.

Annabelle is on her way up, she’s just facing an obstacle, a life changing…ok she’s in prison. But it’s just temporary, more like a spa-like vacation, ok, 8 years for attempted murder. Her lawyer called it ‘justifiable attempted murder’. But she still has music, meatloaf, memories of men, pictures of men, women who look like men…wo-men but no men... Modern Attitudes is very excited to have critically acclaimed Comedy and Gemini award winning actor, writer, director and teacher Bruce Hunter as director for ‘Annabelle’s Tails from Jail’.