ROCKgarden PARTY
July 5-14, 2012
as part of the Toronto Fringe Festival

Can music bring the rain? When the wind howls and a rock talks, will you listen enough to join the Garden Groms and Pixies? Little Fingers Music presents ROCKgarden Party, a highly interactive children’s musical created by Charlie Kert, (with additional material by Justin Ross and Megan 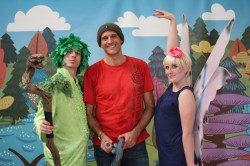 Nadain) playing at the Palmerston Library as part of FRINGEKIDS! at the Toronto Fringe Festival July 5-14, 2012.

Inspired in part by the UK National Trust list "50 Things To Do Before You're 12", ROCKGarden Party aims to encourage the next generation to get offline and out into the garden. Tickets are available beginning June 15 via www.fringetoronto.com, by telephone at 416-966-1062 (ext.1), or at the door.

SkaterDude, an urbanite, loses his way while searching for a rock concert and winds up in a rock garden. Feeling like a fish out of water without the comforts of the city, SkaterDude eventually changes his tune after meeting creatures of the garden Jack in the Green, Earth Angel, and the lonely Talking Rock. Through these new friends SkaterDude learns to appreciate the beauty of the natural world.

ROCKgarden Party was created by Charlie Kert, an aging hipster skateboarder who has been writing and performing music for over 10 years. During a songwriting workshop, Charlie and his students created a song about urban vs. rural life. This planted the seed in Charlie’s mind to modify his rock-concert-style trio performance into a multi-character, plot-driven musical play about music and magic and their connection to nature.