THE OMEGA PROJECT
Part of the Toronto Fringe Festival
July 5-15, 2012

WHY DO YOU BELIEVE WHAT YOU BELIEVE?
WHAT WOULD IT TAKE FOR YOU TO GIVE IT UP?

Daniel and Lindsey met working on the biggest project in FLIP's history: a documentary film about the 2011 uprising in Egypt - called THE OMEGA PROJECT. Their work propelled FLIP (the 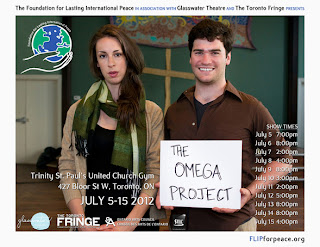 Foundation for Lasting International Peace) to the forefront of the NGO community and helped to create a world-wide movement for non-religious peace initiatives. But was it all a lie? Glasswater Theatre presents THE OMEGA PROJECT, an immersive theatre experience that casts a critical eye on the NGO world, Western interference and the 2011 Egyptian Revolution. Created by the Glasswater Theatre ensemble, THE OMEGA PROJECT is playing at Trinity-St. Paul's United Church as a site-specific production in the Toronto Fringe Festival July 5-15, 2012. Tickets are available via www.fringetoronto.com, by telephone at 416-966-1062 (ext.1), or at the door. Refreshments provided!

What would you do to hold on to the ones you love? Would you create a lie, or stand up to one? Welcome to THE OMEGA PROJECT, by Toronto-based Glasswater Theatre. Set in 2015, we as audience are cast in the role of new members at a workshop for the fictional organization FLIP. We are introduced to Daniel and Lindsey Cooper who worked with FLIP during the uprising in Egypt that birthed the Arab Spring. Daniel loved working with FLIP, but Lindsey seems to know something that he doesn't. As the workshop progresses, it becomes obvious that the truth FLIP is presenting isn't quite right. Who's lying, and what does that mean? 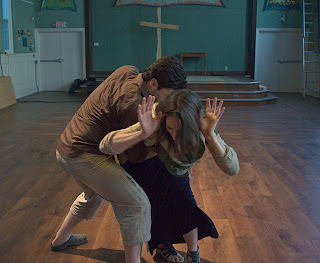 Please note there is absolutely no latecomer seating.
Tickets:
$10 at the door (cash only)
Or in advance beginning June 15 via www.fringetoronto.com or 416-966-1062 ext. 1
plays about ngos plays about the arab spring toronto fringe festival 2012 toronto theatre scene