Africa Up Close: Ruth Mathiang at the NOW Lounge July 6 2012

TORONTO - Ruth Mathiang has quickly become one of the rising stars of African music in Toronto. She comes from a musical family, where both her parents were musicians in their youth. She started her musical career in Kenya performing at social functions and local clubs. Mathiang honed her singing and composing skills by performing with local musicians and adopting various styles from traditional 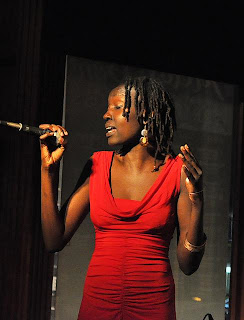 She recorded her first CD “My Cry Peace” in Prince Edward Island, depicting her difficult life growing up in war-ravaged Southern Sudan.  The CD is also a celebration of her faith and resilience as it has a gospel sound.  Her second release “Butterfly” is a more refined recording, which draws from influences such as hip-hop, reggae, afrobeat and gospel. Since coming to Toronto she has established herself as one of the best female vocalist, has performed at several festivals such as Harbourfront Centre’s Hot & Spicy Festival, Afrofest, Bana y’Afrique, as well as numerous venues in the city.  Mathiang also donates her time performing for non-profit agencies that especially work in Africa in sectors such as human rights, women and children issues, primary health care and community development.

AFRICA UP CLOSE is a series of concerts exclusively taking place at the NOW Lounge, a cozy room with a standing capacity of only eighty people. This is an opportunity for the audience to experience music in an intimate setting, as well as interact with the artists. Enjoy healthy, organic, and locally sourced fare from the NOW Lounge’s kitchen, along with the music and ambiance. Resident DJ Apollo entertains between sets.