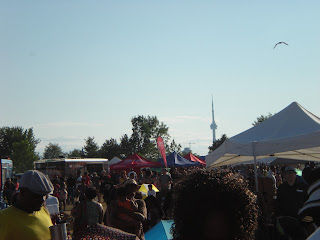 Sultry heat, massive crowds, tonnes of food and a range of fantastic music - Afrofest has settled into its new home in the more spacious fields of Woodbine Park nicely this year.

I headed out in the late afternoon and going into the evening yesterday and caught three great shows on the mainstage.

I started with good old Ethiopian grooves from Adib Abdosh, which seemed like a perfect way to start dancing and getting into the spirit of things. His band is top notch, including multi-instrumental wonder Waleed Abdulhamid (aka Wally Kush) on bass. Classic raspy vocals and sinuous sax lines combined with syncopated rhythms that won't take no for an answer. Some 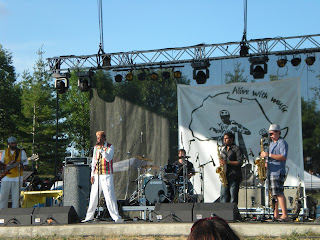 Next up was a sexy and polished set from Tina Ly, a native of French Guyana. Known as the Princess of Zouk, she's been gracing the stage since the age of 8 and her ease with the role and the crowd was evident. She's got a nimble voice and great stage presence.

In Zouk, synths take over the horn lines with melodies and harmonies that add to the vocals. It's heavy on the bass and drums and if you know your Caribbean music, had shades of Kompa too. The band was Fresco and they looked like they were having fun.

Already a star in the Caribbean, it was Tina's first Canadian appearance.

The headliners of the evening were African Guitar Summit. The 8 piece band is the brainchild of CBC Radio producer Todd Fraracci, who one day had the notion to bring together some of the great African guitarists who now make Canada their home. 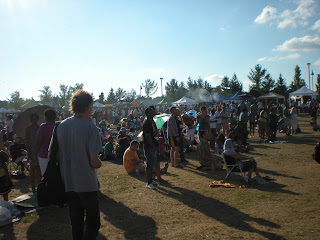 Their crowd pleasing pan-African sound won them the 2005 Juno Award for World Music Album on the Year and they've continued to tour after their second release in 2008. It's no mean feat to harness five guitarists with varying styles and traditions, but they dazzled us with their seamless playing and virtuosity.

P.S. - My one beef is all the photographers who crowded the front of the stage, including one very annoying young guy (see video below!)  Someone needs to explain to them that standing directly in front of performers means that the audience can't see them!