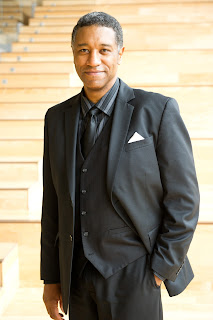 “Singing the music for Slow Man is quite difficult, but thankfully I love challenges, especially those that involve my passion,” said Mark S. Doss. “The upside is it will make my upcoming role as the Dutchman (in The Flying Dutchman) feel like a walk in the park. It is not only an honor, but an extreme privilege to play the pivotal role of Paul Rayment in this world premiere opera of Slow Man.”

Slow Man is the first to reach the opera stage for author and Nobel Prize winner, John Maxwell Coetzee. Although the operatic version differs slightly from the original story, Slow Man is a contemporary opera that arouses deep emotions among each of the main characters: Paul Rayment, Elizabeth Costello and Marijana Jokic.

The opera is centered on a meeting arranged by Costello, the writer, and Rayment, a man of late middle-age with an amputated leg who is left in the care of the blind Jokic. Themes of love, isolation, old age, and fear of demise are prevalent in this production.

Following the run of Slow Man, Mr. Doss will perform once again in Turin, Italy in a pair of productions. He will first take the stage as the Dutchman in The Flying Dutchman (Oct. 2012) followed by the role of Escamillo in Carmen (Nov. 2012) at the impressive Teatro Regio Di Torino. In the New Year, Mr. Doss will be undertaking a double bill performance at Seville’s Teatro La Maestranza in the productions of Sarka and Cavalleria Rusticana, playing the roles of Premysl and Alfio

(Feb. 2013). Additional upcoming performances include the role of Amonasro in Aida at the San Diego Opera (April 2013), and The Four Villains in Offenbach’s The Tales of Hoffmann with Opera Tokyo (Nov. /Dec. 2013).

ABOUT MARK S. DOSS:
Mark S. Doss is a celebrated bass-baritone whose accomplishments include a Grammy Award for his work on the recording of Semele (Handel), and numerous engagements with the famous Teatro alla Scala in Milan, Italy. Mr. Doss began his musical studies to aid in his ambitions to become a Catholic priest, but instead found opera to be his true calling. He has since emerged as one of the opera world’s leading singers.