In some musically vibrant corners of the world, innovation is the tradition.

So it is in Mali, where the sounds of the Saharan north have mingled with an array of West African traditions in the south. Musicians like Andra Kouyaté show how his homeland’s deep and diverse roots are a constant source of innovative inspiration. 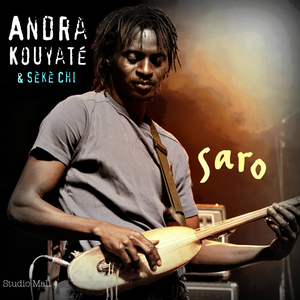 Malian standards into fresh new pieces, and taken a contemporary ear to traditional sounds, incorporating pop and reggae with the effortless aplomb that has put Mali on the world’s musical map.

On his first major international release, Andra and his youthful ensemble Sèkè Chi bring a wide-ranging, aesthetically linked set of songs on Saro (Studio Mali; July 31, 2012). Saro features contributions by Amadou and Mariam; by wife and local star Mah Bara Soumano; by older brother Bassekou Kouyaté; by respected Malian singer Ami Sacko; by Harouna Samake the kamele n’goni player for Salif Keita; and by balafon whiz Lassana Diabaté of the Grammy-winning project AfroCubism. The album reveals Andra’s stunning ability to embrace not only all the musical possibilities of Mali’s many traditions, but also a relentless drive to create and re-imagine the music he loves.

“I am always searching and listening and trying to understand more music. If I only played traditional music in the same way, it would simply be too limiting for me. I want to expand. It’s what I was meant to do.”

Kouyaté’s life may seem to straddle two worlds, but in Mali, in his circle of hereditary musicians and oral historians (jeli or griots), it’s all part of one all-embracing creative effort. From a long-standing, very prominent family of griots, Kouyaté has followed in the footsteps of his forbearers (the meaning of the group’s name, Sèkè Chi). Andra performs a beloved cannon of traditional songs and pieces at weddings, social events, and other major secular and religious celebrations in his community.

Andra’s central role in this community is woven throughout his songs and music. “In ‘Lagaré,’ for example, I mention other griots, and I praise them and acknowledge their significance in our culture, in life in general. I thank them for what they do in life and in society,” Kouyaté explains. “The role of the griot is to bring back to life things that are broken between people, between family members, villages, even countries. And to resolve conflicts.”

And like griots before him, he has kept his musical work all in the family. To build Sèkè Chi, he travelled back to one of his ancestral villages and recruited several young relatives to play with him. His wife, a well-loved griot in her own right, adds her nimble, passionate vocals to tracks like “Den Massa Lou.” Songs 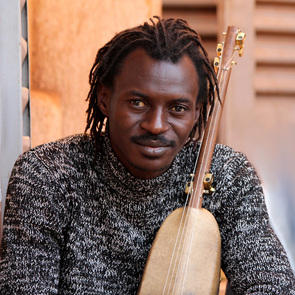 praise Andra’s father and his elder brother (“Bassekou”) and memorialize his young, bright brother who recently passed away tragically (“Saro”).

“I was born with music, and my life is music,” reflects Kouyaté. “This is what we do in my family. If I don’t make music, I am nothing.”

At the same time, Andra’s part in the long chain of tradition and family is marked by a restless, joyful creativity and innovation. He’s a master of incorporating new elements and sounds into songs he has heard and played his entire life, including the northern Malian sounds made famous by bands like Tinariwen and singers like Khaira Arby. Tracks like “Ya Baba” feature the kind of desert-blues string work that drives many Western music fans wild.

Andra has toured the world with Grammy-nominated global indie favorites, Bassekou Kouyaté and Ngoni Ba; spent almost a decade with Rokia Traore; and most recently has been playing and touring with African reggae legend Tiken Jah Fakoly.

Inventing a new version of the ngoni — the precursor to the banjo that can render lightning-fast melodies in skilled hands — Andra took a fresh approach to the traditional instrument, adding the bass sounds he missed to the mix by carefully modifying the n’goni until it achieved a deeper, richer resonance and found the new expressive quality he craved. A relentless rehearser, arranger, and stickler for detail, he thoughtfully 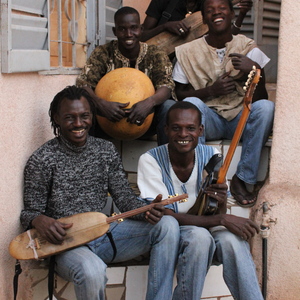