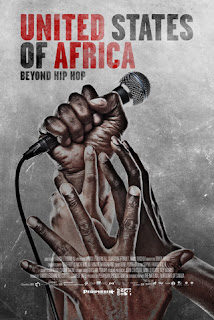 “… a fascinating reflection on the social impact music can have.” Roxane Hudon, Montreal Mirror

Toronto – The electrifying new music documentary United States of Africa will premiere in Toronto starting July 27 at the Bloor Hot Docs Cinema, with director Yanick Létourneau in attendance. In his fourth documentary, Létourneau follows African hip hop pioneer Didier Awadi as he crafts a new album that pays tribute to the great black revolutionary leaders and their struggle to realize their dream of a united, independent Africa. Produced by Périphéria Productions in co-production with the National Film Board of Canada, United States of Africa won the Critics’ Choice Award at the 2011 Montreal International Documentary Festival (RIDM) and has since been travelling the festival circuit worldwide.

On a sprawling, reflective musical and personal journey that takes him to some 40 countries, Awadi meets and collaborates with hip hop artists Smockey (Burkina Faso), M-1 from Dead Prez (United States) and Zuluboy (South Africa). Featuring a score by Ghislain Poirier, as well as Awadi’s own songs, United States of Africa draws the viewer into one artist’s profound meditation on the power of music and the impact of political engagement, both individual and collective. A hopeful and compelling portrait of a continent whose politically aware youth is refusing to lie down and accept the role of victim, the film is a call for Africans of all generations to rise up, take a stand and take control—of their continent and their destiny. 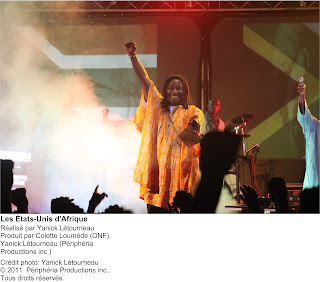 United States of Africa Interactive is an online experience that invites users to share their vision of Africa using a slogan generator and previously unreleased excerpts from the film.