DUSK DANCES is back in Toronto for an 18th Season!
Highly physical, gently magical, charmingly fun... 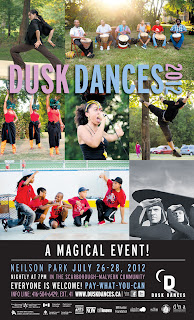 TORONTO - Dusk Dances, one of Toronto’s most vibrant and popular cultural events, returns for its 18th season, with 3 weeks of exciting dance performances at Neilson Park, Withrow Park and Earlscourt Park.

Dusk Dances is an outdoor dance festival that brings high quality contemporary and traditional dance to public parks.  As dusk descends, a theatrical host leads the audience - which invariably includes children, dog walkers and local residents - to a range of eclectic dance pieces that unfold in different areas of the park.  Choreographers from various backgrounds are invited to perform a ten-minute piece inspired by the park’s natural environment.  Audiences are invited on a pay-what-you-can basis to an innovative site-specific festival, which is not only an artistic event but a social and cultural one as well. 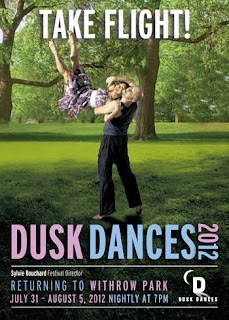 From July 31 - August 5, 2012 at our flagship location, Withrow Park, our host Dan Watson will introduce you to four new works from Zata Omm Dance Projects, Bageshree Vaze, Lua Shayenne & Co., and tiger princess dance projects with Julia Aplin; as well as a performance by Vancouver-based The 605 Collective. Join us for the event that the Toronto Star ranked last year as “one of the top ten dance events to hit the GTA”.

With the past success of its GTA Initiative, the festival continues its dedication to animate communities and urban parks throughout Toronto. This season Dusk Dancesreturns to Neilson Park (July 26 - 28, 2012) and in the West-End at Earlscourt Park (August 16 - 19, 2012).