Jazz CD Release: Kevin Coelho's Funkengruven - The Joy of Driving a B3 (July 10)

Hammond B3 Organ Phenom Kevin Coelho Releases his Debut Album
"Funkengruven - The Joy of Driving a B3," July 10 2012 via Chicken Coup/Summit

The 16-year-old Californian - a protégé of B3 master Tony Monaco, who produced the album - mixes originals with funky covers of "Dock of the Bay" and "Cantaloupe Island"

Kevin Coelho is the sort of teenage phenom that the Hammond B3 organ hasn't seen in decades. It's a measure of his gifts that the 16-year-old Californian's debut album, Funkengruven - The Joy of Driving 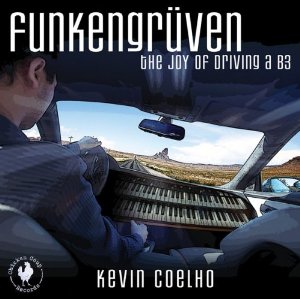 a B3, was produced by a renowned master of the B3: Tony Monaco, whose Chicken Coup Records imprint is releasing Funkengruven on July 10, 2012, via Summit Records. "Kevin is a fascinating and brilliant young musician," says Monaco, who not only helmed the sessions but also lent Coelho the players from his hot touring trio: guitarist Derek DiCenzo and drummer Reggie Jackson. "In a lot of ways, Kevin reminds me of the young me! He has already studied an enormous amount and has a great grasp of what and how he wants to play. He really knows how to play that left-hand bass, which is the key to driving the music. Producing the record for Kevin was a wonderful experience for me, a real gift."

Recorded at Monaco's B3-customized Columbus Sound Studio in Ohio, Funkengruven features Coelho's ingeniously funky arrangements of Otis Redding's evergreen "Dock of the Bay" and Herbie Hancock's soul-jazz smash "Cantaloupe Island." The album's title track is an original by Coelho, as is "McJimmy" - the young organist's homage to the uplifting gospel sound of B3 idol Jimmy McGriff. Along with versions of "Play It Back" by veteran Hammond virtuoso Dr. Lonnie Smith, the Miles Davis bop classic "Donna Lee" and the standard "What's New," the disc includes two pieces by one of Coelho's prime teachers, trumpeter-composer and theoretician Randy Masters.

Classically trained in piano, Coelho fell in love with the sound of the Hammond B3 when he first heard a recording of "Green Onions" by Booker T & the MGs, and he eventually graduated to adoring the records of jazz organists Jimmy McGriff, Jimmy Smith and Don Patterson. The R&B of the '60s and '70s is a passion, too, with that material ripe for the picking by an imaginative Hammond player, he says: " `Dock of the Bay' was an early favorite of mine - and the organ just sounds so good in smooth, mellow R&B like that." As for "Cantaloupe Island," that was a prime vehicle when Coelho was studying piano. "There's a lot more to the song than just Herbie's opening piano lick," he says. "We turned it into a funk tune by changing the beat and putting a James Brown bass line under it, then did some arranging on the chords at the end, and voilà."

One of the album's other highlights is "Chagalu" by Masters. "Randy is an incredible composer - his pieces are deeply musical and playable, with wonderful lines," Coelho says. "It's a Latin tune and really catchy - it's our radio tune, I think."

Coelho describes his "Funkengruven" title tune as "a riff blues over a set of non-standard changes, something that's funky and grooving but also swings. Those are tricky things to reconcile, funk and swing, not a lot of players can do it. But Reggie and Derek can do anything. They really have the 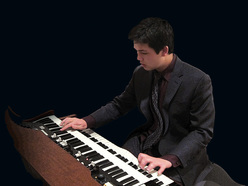 dynamics of the organ trio down from playing so long with Tony." Jackson is "a human metronome, his time beyond solid," Coelho says. "He's intense, too. Reggie might make the people upfront deaf, but he'll take the music to the highest possible energy level. He and Tony go places with the music where I rarely hear other musicians go. And Derek is a character. The first time I saw him play, he was wearing night-vision goggles all through the gig. He has his own sound, too - the unexpected is his thing. Even when he does something wrong, it's right."

As for his own role, Coelho says: "I'm still developing my own sound, of course. I'm concentrating on trying to re-create in my own way the soul and energy of those old records I love - and that I see Tony Monaco play with now. It's all about soul and energy."

In July, Coelho makes a return appearance at the Luna Pier Bootleggers and Blues Festival in Michigan, and in August, he returns to perform at the San Jose Jazz Festival in California - showcasing material from Funkengruven with DiCenzo and Jackson at both shows.

Coelho, who was born on August 29, 1995, started studying piano at age 6 and began his jazz and organ studies at age 11. Along with Randy Masters and Tony Monaco, his jazz teachers include noted Bay Area Hammond B3 player Wil Blades. The young musician has also had master classes with Larry Goldings and Bennett Paster, among others. In 2010, Coelho attended and performed at the Eastman School of Music Summer Jazz program as a rare freshman to be admitted. He has participated in and performed at the Stanford Jazz Workshop for the past five years, winning the Outstanding Soloist award multiple times as well as being honored with the prestigious Shape of Jazz to Come award. With his group The Groove Messengers, Coelho performed at the 2011 San Jose Jazz Festival, and he also played the 2011 Stanford Jazz Festival, as well as at clubs and corporate events across the country in groups with such professional musicians as Charles McCarthy, Akira Tana, Jason Lewis, James Witzel, Ray Scott and Rob Gibson, among others. Coelho attends Los Altos High School in California, where he is a straight-A student. 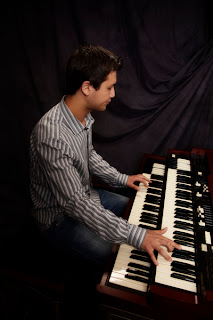