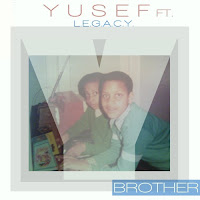 (New York, NY)—-DMV based emcee Yusef announces the release of his self-produced single “Brother” featuring the soul singer Legacy. The single is off his forthcoming concept album “Jazz & The Joint Forces” (set for a digital release on July 4th, 2012). The album aims to combine some of the many forces of jazz music (primarily improvisation) while melding it with his very own flavor of hip hop.

“Brother” is song that was designed to cover three forms of brotherhood that I feel are in need of increase in todays day & age,” shares Yusef. “First, the perspective of brotherhood in terms of mentoring young men on the ways of survival in this world. Secondly, touching on the personal relationship I have (and others might and should have) with their immediate family and siblings in order to have true strength as a people. Finally, the backbone of all successful brotherhoods hinges on the women and strong sisters tying everything together.”

Yusef: A true son of the Queens, NY streets. Raised among the times, sounds and people of Hip Hop’s first golden era. Those New York City roots stick to the essence of his production, even after relocating to the DC area. If Yusef could describe his music, it would be in the form of a love poem to life on those streets, to the people that dwell in similar circumstances, and to the fearlessness of generational icons such as Marvin Gaye, Malcolm X, James Brown, Public Enemy and De La Soul to name a few. A raw glimpse of the past, present and future of not only trying to just sustain life, but of the journey through the love for life and God that glues it all together. Hidden between the hip hop beats are essences of jazz, house and the newer sounds that are being created now in the moment. His music is about evolution. “I want something fresh each time, I want people to feel something different”, says Yusef At the heart of the matter, his music is an ode to the listener; to not only follow him on a journey, but to join in.