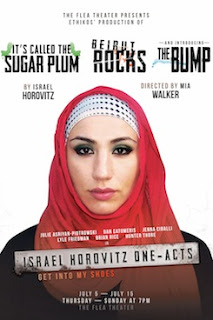 NEW YORK, NY – Over a half century of works collide as The Flea Theater presents Ethikos Productions’ Israel Horovitz One-Acts, featuring It’s Called the Sugar Plum, Beirut Rocks, and the U.S. Premiere of his latest play, The Bump.  Directed by former Flea Resident Director Mia Walker, the production previews July 5, with opening night slated for Friday, July 6.  All tickets are only $20.

“I was so horrified to learn that Ethikos was insisting on producing a play I wrote at age 17 (It's Called the Sugar Plum) that I rushed to one of their recent rehearsals to give them a play I had written only 17 days earlier (The Bump),” says Horovitz. “From what I saw, however, the future of our theatre is indeed hopeful. As ever, I'm delighted to be working with young theatre artists such as the Ethikos troupe.”

Set in late 1950’s Cambridge, It’s Called the Sugar Plum is a dark comedy about two college students fighting grief, guilt and greed in the wake of a tragic accident.  In Beirut Rocks, tensions reach fever pitch as four American students await evacuation in the midst of the 2006 Hezbollah air raids.  Complementing these two pieces is The Bump, a brief encounter between two conflicted hearts in a U.S. passport office.

“This rare combination of work speaks to Horovitz’s ability to transcend generational and cultural boundaries,” says director Mia Walker. “These plays address the timeless desires of young adults as they deal with identity, love, possession, and obsession—depictions that are both haunting and comic.”

Israel Horovitz One-Acts coincides with the production Enfermés by La Troupe en Bois in Paris this summer, which also pairs Sugar Plum with Beirut Rocks. “The Ethikos team truly fell in love with Sugar Plum, and Israel was so kind to inform us of what other young artists abroad were doing,” says Ethikos Co-Founder Jenna Ciralli.  “Combined with a U.S. premiere, we couldn’t be happier to bring this show, our inaugural production, to The Flea.”

Israel Horovitz’s 70+ plays have been translated and performed in as many as 30 languages worldwide.  Best-known plays include Line (in its 39th year, off-Bway), The Indian Wants The Bronx, It’s Called The Sugar Plum, Rats, Morning, The Primary English Class, The Wakefield Plays (Alfred the Great, Our Father’s Failing, Alfred Dies, Hopscotch, The 75th, Stage Directions and Spared), The Widow’s Blind Date, The Growing Up Jewish Trilogy (Today, I Am A Fountain Pen, A Rosen By Any Other Name, and The Chopin Playoffs), Park Your Car In Harvard Yard, North Shore Fish, Fighting Over Beverley, Lebensraum, My Old Lady, Unexpected Tenderness, Fast Hands, 6 Hotels (The Wedding Play, Speaking of Tushy, Beirut Rocks, The Audition Play, Fiddleheads and Lovers, and 2nd Violin), Compromise, and The Secret of Mme. Bonnard’s Bath. He is the most-produced American playwright in French theatre history.  Awards include OBIE (twice), Prix Italia, Drama Desk Award, 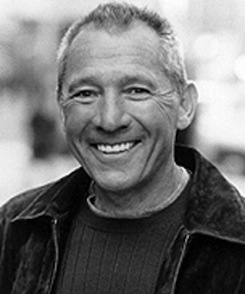 Award in Literature of the American Academy of Arts and Letters, and many others. Horovitz was recently decorated as Commandeur dans l’Ordre des Arts et des Lettres, France’s highest honor awarded to foreign artists.  He is Founding Artistic Director of Gloucester Stage, and active Artistic Director of the New York Playwrights Lab.

The Flea Theater, under Artistic Director Jim Simpson and Producing Director Carol Ostrow, is one of New York's leading off-off-Broadway companies. Winner of a Special

Drama Desk Award for outstanding achievement, Obie Awards and an Otto for political theater, The Flea has presented over 100 plays and numerous dance and live music performances since its inception in 1996.

ISRAEL HOROVITZ ONE-ACTS runs July 5-8 & 12-15, Thursday through Sunday at 7pm. The Flea Theater is located at 41 White Street between Church and Broadway, three blocks south of Canal, close to the A/C/E, N/R/Q, 6, J/M/Z and 1 subway lines. Tickets are $20 and are available by calling 212-352-3101 or online at theflea.org.
israel horovitz off broadway one act plays theater in new york city