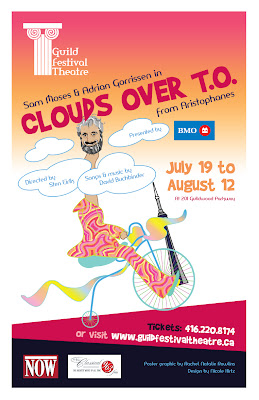 Clouds over T.O. is directed by founding Artistic Director Sten Eirik, featuring the rousing music and brand-new songs of award-winning composer David Buchbinder. Music Director for the show is Adam Sakiyama, with choreography by Jane Johanson, costumes by Bonnie Deakin and lighting by Amanda Gougeon.

In our adaptation, Clouds over T.O. shifts the action from ancient Athens to modern-day Toronto, capturing the new-fangled folly of our own times and the satirical edge of an ancient comedian. The show’s anti-hero is Fergus, a modern Everyman coping with the complexities and disinformation of urban living. He is deeply and desperately in debt because of indulging his son Royce’s passion for race car driving. As a result, Fergus is obliged to seek help from Dr. B. S. Kroc, who has a way of marrying therapy and obfuscation in order to escape the responsibilities of bad credit.

The Guild Festival Theatre is situated adjacent to the rugged cliffs of the Scarborough Bluffs overlooking the sparkling waters of Lake Ontario. Every performance takes on the magic of this enchanted setting, featuring an open-air stage with eight columns, Corinthian capitals, and elegant 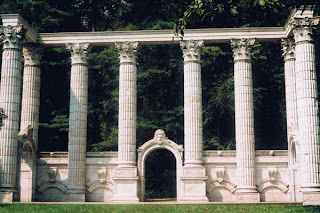 arches joining the columns – the only theatre of its kind in Canada. Audience seating is provided, but our patrons are welcome to bring a blanket, cushion or favourite chair from home.