Quarteto Olinda July 22 in NYC as part of Brasil Summerfest

NEW YORK CITY - From the clubs in Recife to the stages of New York, Quarteto Olinda brings their forró de rabeca to the United States for the first time. The sounds of the rabeca, the Brazilian folk fiddle, and the drumbeat of the zabumba will get the dance floor going just like a Brazilian summer 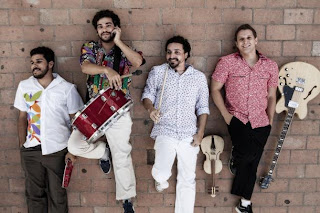 night. The members of Quarteto Olinda grew up surrounded by the music of the Northeast of Brazil, and now bring their own perspective to the regional styles of forró, coco, and cavalo marinho. Cláudio Rabeca leads this group of hotshot young musicians from Recife and Olinda on the rabeca, with Yuri Rabid on bass, Guga Amorim, Bruno Vizenof, and Carlos Amarelo on percussion.

The heirs to a long line of performers from Pernambuco, Quarteto Olinda makes the traditional music of forró immediate and contemporary. The members of the band grew up playing with the masters of regional genres, and are now leaders in their artistic community. Their weekly shows at Xinxim da Baiana in Olinda grew so packed that they were shut down by the police as the crowd spilled into the streets at all hours of the night. Quarteto Olinda is now one of the most popular bands in Recife, performing throughout Brazil, Europe, and now for the first time in the United States.

Forró de rabeca, the style of fiddle-led dance music, is uniquely associated with Pernambuco. Created in the sugarcane-growing rural areas of the state, forró de rabeca was eclipsed as the accordion took front and center with the ascendancy of Luiz Gonzaga, the “King of Baião.” However, in the cities of Recife and Olinda, and the countryside of Pernambuco, there remained a dedicated following for forró de rabeca, spearheaded by master rabeca player Mestre Salustiano.  Salustiano founded Casa da Rabeca, a local cultural center dedicated to celebrating the rabeca and regional Pernambucan culture, 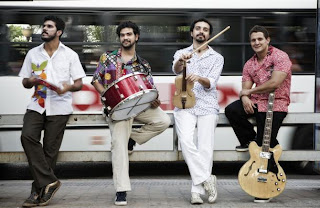 and trained many of the area’s best musicians, including Cláudio Rabeca. While the rabeca is played throughout the country, the performers in Pernambuco have brought popularity and pride to the sound of this roughly carved fiddle, crafting a community around the instrument that is unique.

With such great love for the sound of the rabeca and the music of forró, Quarteto Olinda is making their mark, moving audiences around the world with their infectious dance music and superb musicianship. Get your dancing shoes on, and segure a chapa (hold on to your hats)!

BRASIL SUMMERFEST returns for its second edition July 21-28, 2012 to various NYC venues.  The festival aims to introduce New Yorkers to a sampling of Brazil’s dynamic Artists, and the richness and diversity of the country’s contemporary music scene.