TORONTO - I checked out the very last show of the TD Toronto Jazz Festival Sunday night. It was packed under the big tent at Nathan Phillips Square and steamy hot outside, and I have to mention 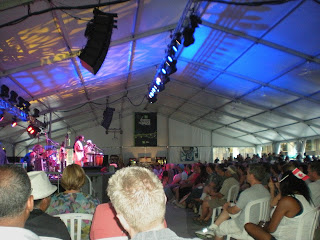 decent sound even from the sides of the stage.

Sierra Leone's Refugee All Stars provided a bouncy and energetic opening to the show with a set of crowd pleasing reggae and hyper-kinetic West African grooves. The band has nice vocal harmonies and a supertight rhythm section.

It being Toronto and Canadian, it didn't seem at all out of place to be celebrating Canada Day with African, American - and African-American talent. In any case, there was a definite Canadian connection with the opening act.

A group of musicians from Freetown, Sierra Leone met in a refugee camp in neighbouring Guinea during their native country's long civil war in  the 1990's. It was  a Canadian aid agency who first donated a couple of guitars, mics and other equipment and the group began to play to while away the hours for fellow refugees. It was the genesis of the group that would gel back in Freetown after the war.

A decade later, they're touring the world in support of their third album, Radio Salone.

Back to the show; people were wiggling in their chairs but typically, the TO crowd too sphincter 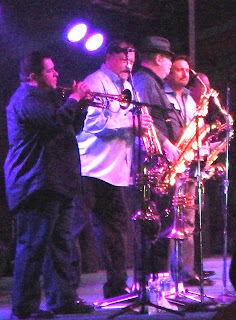 challenged to dance until nearly the end of their opening set - but not many human beings can resist soukous after all. Once they were up, there was always at least a few out of their seats dancing (ahem) for the rest of the night.

Tower of Power delivered just what the crowd came for - the big sound, that classic funk/soul/rnb style and a string of medleys and familiar songs. A five piece horn section provides their signature sound, meshing seamlessly with the churning rhythm section and fat Hammond B3. Larry Braggs is the perfect lead singer, with a powerful voice that soared above it all.

The band has been around for 44 years and founder (and second tenor sax player) Emilio Castillo and a couple of the others have been around for the duration. The crowd ate it up and were already standing by the last number.