Lee Meriwether and Theatre Island Productions Present
THE WOMEN OF SPOON RIVER: THEIR VOICES FROM THE HILL
The New York International Fringe Festival - FringeNYC
A production of The Present Company
August 10th - 26th 2012 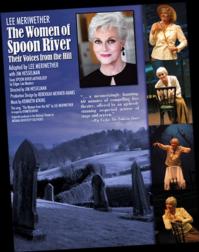 Published in 1915, Edgar Lee Masters' SPOON RIVER ANTHOLOGY is a collection of epitaph poems describing the lives of the inhabitants of the fictional small town of Spoon River, and includes two hundred and twelve separate characters providing accounts of their lives, losses and deaths. In 1962, Charles Aidman adapted SPOON RIVER ANTHOLOGY for the stage. This production premiered in Los Angeles and starred Betty Garrett, Joyce Van Patten, and Naomi Caryl in the three female roles. Understudying Garrett, Van Patten and Caryl was Lee Meriwether. The show then had a successful run on Broadway and has since been produced thousands of times around the world.

In 2002, Theatre West revived the show for its 40th anniversary, directed by Garrett and Van Patten. This time, however, Lee Meriwether — the one-time understudy — now appeared in the role originated by Ms. Garrett.  Having an affinity for the show and the women of Spoon River, Lee often felt that Masters had given short shrift to the female residents of his fictional town. Of the over two hundred characters in the collection, only a handful were women. Seeing an opportunity to give these 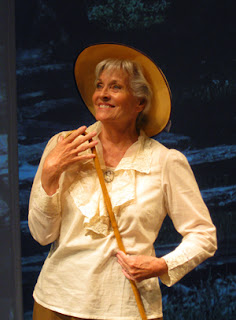 women their due as well as to provide a challenge for herself as an actress, Lee set about adapting Masters' work, extracting nearly all of the female characters.

Later, together with writer/actor/director Jim Hesselman, Lee discovered that by performing them in a particular order she could create not only personal accounts of the women as individuals, but also depict an overall picture of the life of women in general — both in terms of a particular period and place, but also in universal and eternal terms. THE WOMEN OF SPOON RIVER: THEIR VOICES FROM THE HILL premiered in May of 2010 at Indiana University Southeast, starring Meriwether and directed by Hesselman, with scenic and lighting design by Rebekkah J. Meixner-Hanks and original music by Kenneth Atkins. The show then enjoyed a run of several weeks at Theatre West in 2011.

Lee Meriwether will be presenting The Women of Spoon River: Their Voices from the Hill as part of the 2012 New York International Fringe Festival, August 10-26, 2012. 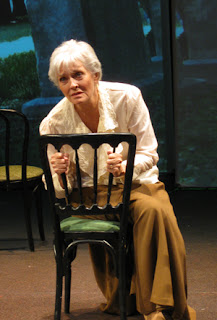 Tickets are $15-$18 and will be available at www.FringeNYC.org

Images:
Photos from the original production at Indiana University Southeast, May 2010.
All photos by Rebekkah Meixner-Hanks and © 2010 by Lee Meriwether