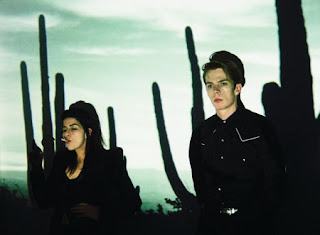 One for fans of Depeche Mode, Duran Duran, Eurythmics, NIN, Bauhaus, The XX.

Modern electro-pop duo WAZU is pleased to announce details of a twenty-date summer tour that will precede the release of their debut, yet to be titled, full-length album. The album, to be released on Halloween, was co-produced by WAZU, Kevin McMahon (Titus Andronicus, Real Estate, Swans, The Walkmen) and Rick Parker (Black Rebel Motorcycle Club, The Hangmen).

These New York City-based Australian transplants appear to have swallowed some of the same sexy electronic pills as The xx, but have regurgitated them in a much more elaborate and foreboding fashion, earning them heaps of buzz from outlets such as KEXP, BBC, AOL, CONTACT MUSIC, THE DELI MAGAZINE, and FLAVORPILL. Their dark and danceable self-titled debut is a glorious, vicious little tease of what’s to come from this male-female duo.

The video for “Murder 1,” the synth-heavy, post apocalyptic first single from the WAZU EP is receiving rave reviews after premiering exclusively on Contact Music. It was also recently featured as Video of the Day on SPINNER. Watch it here: http://www.spinner.com/2012/02/20/wazu-murder-1-video-of-the-day/

“Happy Endings,” the second single, is an electro goth-punk sing-along that resonates with the lyrics, “take a look at me / I’m living proof / happy endings don’t have room for two.” Never has heartbreak sounded so enticing and danceable.

WAZU have also had success at College Radio, receiving heavy rotation at stations such as WRSU Rutgers University NJ and KXSC University of Southern California Los Angeles, and even Song of the Day at KEXP University of Washington Seattle. Of WAZU, Ultra Vulgar Super Fiend says, “The sky is the limit for this group, and they prove it with every track.” Don’t miss your chance to see WAZU before they blow up, and keep your ear to the ground for the first single from WAZU’s debut LP, coming soon. 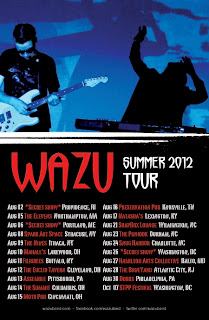