Alive at the Vanguard delivers a sophisticated sound from musicians at the top of their game; a virtuosic and stylish recording in front of an appreciative live audience at the famous West Village landmark. The performance by Hersch’s trio with bassist John Hébert and drummer 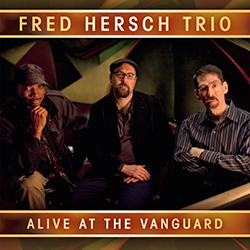 Eric McPherson is full of surprises, twists and turns that fascinate to the end of this double album to be released on the Palmetto label on September 11, 2012.

This new piano trio recording by five-time Grammy nominee Fred Hersch is melodic with a sense of drama, a certain theatricality about it. The music is thoroughly contemporary even as it pays tribute to the legacy of the greats of the genre, using its virtuosity and rhythmic complexity for expressive results. The double album features a diverse array of seven new Hersch originals, four American Songbook gems and seven classic jazz tunes.

“This may be my best trio playing on record, in terms of range, sound, being in the moment, and the way we play together,” says Hersch, 56. “Not that I disown any of my former albums, but considering where I was three to four years ago, this is very strong, focused playing. And sonically I think it really captures the Vanguard. It sounds different than a studio album, and it should sound different, so you feel like you’re there.”

Sometimes swingy, the songs are also sometimes hauntingly beautiful, as in Tristesse (for Paul Motian) a tribute to the late drummer dominated by piano with drum lines that intertwine with the keyboard. I also loved the emotional I Fall in Love Too Easily, which takes advantage of the moodier qualities of the bass as it trades off leads with the piano.

Every note is considered and has a purpose. The trio features more of an interplay of instruments rather than a typical lead and accompaniment arrangement, with the drums often a kinetic counterpoint to the piano's melody rather than a straight rhythmic base. The music is very of the moment even as the recording tips its hat to the legends, including pairing unlikely tunes together in medleys (a trademark of Hersch's). I like his gorgeously re-harmonized version of Ornette Colman's Lonely Woman as paired with Miles Davis’ shimmery Nardis. 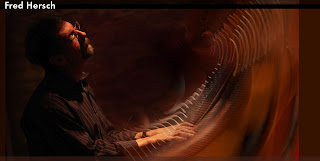 Hersch includes a version of Rollins' Softly As In A Morning Sunrise, a piece the tenor sax legend recorded on his classic 1957 album Live at the Village Vanguard and he ends the first disc with an unusually slow rendition of the Rollins standard Doxy. Play it when you have time to listen - the double CD set makes a satisfying listen for the true jazz lover.

U.K. and other European dates to the end of the year, back in the U.S. in 2013 - check his website for additional dates