I still suffer from nightmares.
It's better than at the beginning of my stay here.
But I still have nightmares. 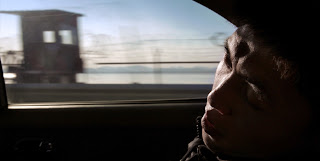 Welcome to the surreal world of Shin Dong-Huyk, a North Korean who escaped to the West from a camp for political prisoners in his native country in 2005 at age 23.

I'm resting so I don't have to do other things.
This quietude helps me kill time. I don't want to think about anything.

Calm, articulate and honest in a way that is stripped of any pretense, Shin talks about his life in the camp and now afterwards as he still struggles to come to terms with the terrible freedom of living on his own. In shots of him in his spartan apartment - where he still sleeps on the floor - he seems bemused by the variety he finds in his own fridge while the modern city of Seoul shimmers outside his window. At a grocery store, he confronts the sea of choices with a blank stare. As he relates, in the camps they were kept on a starvation diet that could be cut back at any time at the whim of the guards. The only meat they ever ate came from the rats that they would catch and eat bones and all.

Shin's only crime was to have been born. His parents were both political prisoners who were forced to marry. His mother was given to his father as a reward for good work and he was born into the life of a 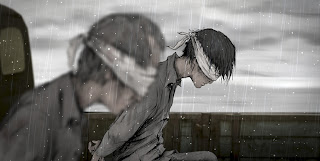 prisoner, forced into labour in the mines at the age of six. The children pushed out the carts of coal their parents had mined. Until he physically left the camp, he couldn't conceive of a world that wasn't like the prison camp, where he lived with his mother in an unheated hut and slept on a concrete floor. One of his first memories of the camp is of a public execution he attended with his mother at age four.

When the shots were fired, I panicked. That is my first memory of my childhood in the camp.

He talks about his former life in even tones that belie the nature of the topic, never meeting the eyes of either the reporter or the camera. At age 7 or 8, he witnessed a classmate beaten senseless by the teacher for finding a few grains in her pockets (they were searched of course) - she died that evening of head injuries. The scenes of Shin talking in his apartment are augmented by animated segments that portray the bleak camp life he describes. The film also includes similar interviews with former guards from other prison camps, now ensconced in their new lives in the South. 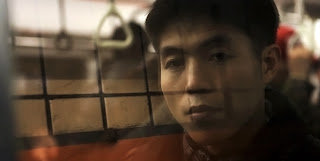 It doesn't take much to be arrested in North Korea.

The guards recount their duties - as bemused as the former prisoner at the contrast between their former and current lives. There is authentic - and truly frightening - footage of a police interrogation that was smuggled out of the country. It's disturbing and violent, but no less so than when the guards recall their own cruelty with a smile at the memory of having the power of life and death over their prisoners. Both describe sexually abusing female inmates, and while neither admits to the act themselves, recount how the women who were unfortunate enough to get pregnant by a guard were brutally murdered.

The film sets up a riveting story that unfolds in unexpected ways, posing big questions about human nature. If people are stripped of all rights and treated like animals, is it possible for anyone in the situation to retain any vestiges of humanity? It asserts definitively that it is possible to break the human spirit and exposes the true evil of a totalitarian system and political imprisonment.

Shin's father told him stories about his life in the outside world before his imprisonment that ignited his imagination, the food in particular. The idea of eating chicken and eating until he was full was intoxicating - 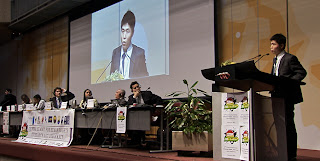 more so than any ideas about freedom. After a harrowing escape with a friend who didn't survive traversing the electric fence, he ran to his first astonishing taste of freedom without even so much as a concept of money.

Nowadays, Shin is an activist and works with LINK - Liberty for North Korea - a group of American kids whose enthusiasm comes in marked contrast to his carefully controlled demeanour. The scenes with the group are the only ones in which Shin isn't entirely alone and when he smiles in a way that seems genuine. He describes his torture in great detail - in outside detail like the way they tied him up or beat him - but never how bad it hurt or the real pain he's in. Somehow, he's keeping it all at bay except for rare moments when the emotions come through.

Incredibly to an outsider, he hopes to return home one day to that same camp and farm the land. Shin is someone who is neither really living in his body in South Korea nor physically in the prison he'll never outgrow.