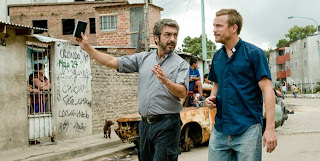 Two worlds are contrasted, collide or rasp against each other abrasively from the opening segments of this film, a drama set in the enormous Villa Maria slum of Buenos Aires. The contrast comes as both visual and in the form of the two priests at the heart of this story. Father Julián (Ricardo Darín) is the older veteran and Father Nicolás (Jérémie Renier) his young protege from France, both trying to bring medicines, supplies, education and justice to the poverty-stricken neighbourhood of some 30,000 people living in this vast expanse of flat tin roofs and makeshift buildings.

The complex was supposed to include a government hospital, in fact the largest hospital in Latin America, a project that has been worked on it fits and starts for decades - the titular White Elephant. Father Julián has made it his quixotic mission to complete the building and open it to serve the people of the area. He's the older man, more reasoned, used to playing the politics of his own church in trying to find the money and help his parishioners, staying neutral and calm even as he breaks up a street fight. Father Nicolás, scarred at being the only survivor of a massacre in the Amazon before this posting, eschews politics for a more hands on approach to helping. The two clash as he gets involved in trying to mediate between sides in the violent turf wars between drug gangs. This is also a very modern version of the priesthood, where Father Nicolás develops a relationship with the local social worker, Lucinda. 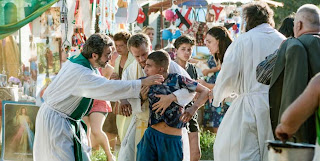 The film is beautifully shot, from the steamy banks of the Amazon to the dirty streets of Villa Maria, where, when it rains, the streets are transformed into mucky pools. The comfortable world of the bishop and the politicians Father Julián courts is juxtaposed with the elaborate and endless interiors of the shantytown with room after room and hallway after hallway in a local drug lord's den. It gives the movie an entirely authentic feel.

This is no pat story about good vs. evil or the brave undertrodden masses vs. the government. The children of the neighbourhood are disturbingly complacent about their situation and enjoy their lives of deliquency. They're inured to the everyday violence and atrocities. The people run from drug dealers' bullets and the police and their raids too, and it's church politics that holds up completion of the clinic. In the end, what can the priests do - what have they accomplished? What can actually be done for people who are complicit in their own situation and where everyone has a self serving agenda?

The ending has an unfinished feel, just as the situation would in real life. There are no easy answers - but a lot to think about - in this engrossing story.