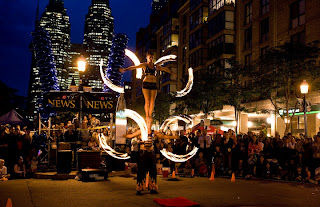 annual Toronto international street performers festival. The 2012 Scotiabank BuskerFest will dazzle Toronto's St. Lawrence Market Neighbourhood once again as buskers from all over the world take over the streets from Thursday, August 23 to Sunday, August 26. Prepare to be amazed by some of the most unique pogo-sticking, hula-hooping, fire-breathing, pillow juggling, body-contorting, whip-cracking, cyr-wheel spinning, sword swallowing, flaming-rope jumping performers in the world. Named for the fifth time as one of Ontario's top 100 festivals and events by Festivals and Events Ontario, Scotiabank BuskerFest promises four days and nights of spectacular entertainment in support of Epilepsy Toronto.

Last year's Scotiabank BuskerFest attracted over 1 million spectators and this year promises to be even bigger, with over 100 of the best street performers from Australia, Austria, Canada, Ireland, Japan, Mexico, Russia, the United Kingdom and the United States participating.

Making their first-ever appearance at the Scotiabank BuskerFest are the following NEW ACTS: 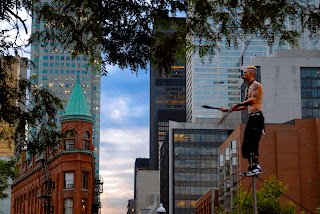 From USA: Cirque Mechanics, the innovative Las Vegas-based theatrical circus company, reveal their new one-of-a-kind performance machine, the Gantry Bike, at this year's festival. The 18' high portable pedal-driven Gantry Bike is a freestanding, self-contained circus on wheels. Festival attendees will enjoy thrilling ground-based acts - like juggling, contortion and hand balancing - performed high on a suspended platform, in addition to dynamic aerial acts, all as the Gantry Bike is driven through and over the audience, providing them with that exciting "front row" feeling!

From the U.S.: Chicago Ultimate Tumblers made a big splash on the TV program "America's Got Talent" and with 12 performers, they are the largest circle show to ever perform at the festival. C.U.T is a non-for-profit organization created to empower youth, teaching its members to soar (literally) through the air! 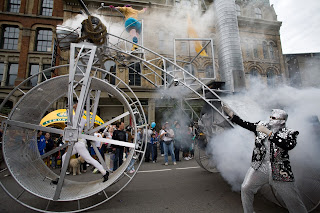 From Australia: Mario - Queen of the Circus has wowed audiences all over the world with his unique mix of complex juggling tricks and universal sex appeal that can only find release in the arena-rocking anthems of his favourite super-group, Queen. 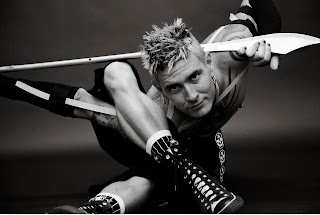 charismatic and fantastic performer, with a  show full of circus and martial arts, fire and humour, including a Mexican hula hoop that becomes a high-flying human flag; and Toronto's own Fireguy who presents his new show 'Fire Power'; - along with many more great acts!

Admission to Scotiabank BuskerFest is by voluntary donation to Epilepsy Toronto, a non-profit organization dedicated to helping more than 40,000 Torontonians with epilepsy, and their families, through counselling, employment support, advocacy and education. Buskers retain proceeds from "the hat" passed after their performances except for two special group benefit shows where proceeds go to Epilepsy Toronto: the 7th Annual Fire Show showcases the 'hottest' fire performers at the fest (Fri, Aug 24 at 9:30pm - rain date Aug 25), and the Grande Finale (Aug 26 at 6:30pm) where the winner of this year's Metro's People's Choice Award will be announced.