VOLCANO THEATRE and CLASSICAL MUSIC CONSORT present
AN UNDERGROUND/OPERA:
the World Premiere of a New Site-Specific Version a Baroque Opera by Handel
A Synonym for Love
An Opera That Moves
3 lovers + 1 baroque orchestra = 1 unforgettable night at the Gladstone Hotel
Performances August 19 to 31, 2012

Toronto - Volcano Theatre and Classical Music Consort (CMC) present the world premiere of A Synonym for Love. With a modernized English libretto and a live Baroque orchestra playing period instruments, three singers will seduce their audiences as they travel through the hallways, bedrooms, bathrooms and bars of the Gladstone Hotel exploring the inevitability - and the impossibility - of love. Handel's operatic cantata about a love triangle sees its Canadian premiere as a staged work, and the world premiere of this unique site-specific opera as a whole, as A Synonym for Love previews August 19, and runs August 20-31, at Toronto's storied Gladstone Hotel.

In 1707, at age 21, a young genius named George Frideric Handel moved to Italy and composed a stunning cantata, experimenting with musical and dramatic forms. Clori, Tirsi e Fileno centres on the theme of love and charts the course of a love triangle between two shepherds and a shepherdess.

In Handel's version, the parts are usually sung by two sopranos and a counter-tenor with one of the women pretending to be a man (a common conceit in opera of that era). In this updated version, the two sopranos remain women - one is gay, one is bisexual. They are in a committed relationship. The man is straight, and on the make. Everyone is at the same hotel. They all sing like angels. This is a love triangle for the 21st century. 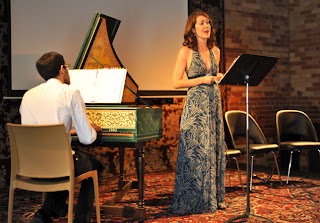 The audience is initially seated at tables scattered through the Gladstone's ballroom, and - as the opera progresses - they follow a specific singer through the hotel. "Staff" will guide them from location to location as they pursue their chosen character. All will meet again for the finale.

Clori, Tirsi e Fileno has a remarkable history: though fully realized as a mini-opera in 1707, it was never performed publicly in Handel's lifetime (he borrowed from it for later operas, and a few of the arias  are now famous). When he died in 1759, the score was thought lost to history. However, in 1960, a single complete copy was discovered in a German library. Forty years later, in 2000, and nearly three hundred years after it was written, Clori, Tirsi e Fileno finally received its world premiere in London. This will be

its Canadian premiere as a staged work, and a world premiere of this adapted libretto.

In this updated daring version, three guests are staying at the historic Gladstone Hotel in Toronto - one of the most beautiful boutique hotels in the city. A man is nervously waiting at a table for a lover. She arrives straight from the airport. Another woman - who also happens to be the first woman's lover - is waiting in the bar, to spy on this meeting. She sees her partner kiss this man, and enraged, storms out. This is the beginning of a - literally - moving love triangle, and an exploration of the nature of love itself.

The opera is sung in a new English version by award-winning writer and internationally recognized experimental theatre maker Deborah Pearson (a London UK-based Canadian, recently named by The Stage as one of the top 100 "great and good" in British Theatre). The libretto is created specifically for the production at the Gladstone. The score has been rearranged and dialogue inserted, so that each of the three audience tracks will allow for every audience member to understand the whole story, but to spend

more time with one character and thus be immersed in that character's point of view. In effect, three audiences will weave through the hotel, meeting for duets or trios or whenever one character eavesdrops on another.

Volcano Theatre is an international, award-winning theatre company based in Toronto that boldly explores identity, politics and history from the internationally informed perspective of 21st century Canada. For almost 20 years, Artistic Director Ross Manson has led Volcano to be a vital contributor to the city's theatre scene, winning awards locally, nationally and internationally. Volcano redefines what it means to produce outward-looking and innovative performance - theatre that is stylistically modern and vividly entertaining. Volcano productions include Goodness, Another Africa, The Africa Trilogy, The Four Horsemen Project and Hedda Gabler, among others.

Originally conceived by the Classical Music Consort, conducted by founder and Artistic Director Ashiq Aziz, the Underground /Opera series mixes the old with the new, combining classical music performed on period instruments with contemporary staging and presentation. Classical Music Consort, founded in 2006, is committed to attracting a new generation of Canadians to Baroque and Classical music through authentic performance and innovative presentation. Underground/Opera's most recent sold-out show was Orlando Lunaire, a groundbreaking mash-up of two operas from different periods performed in a shed on an industrial site.

Guests of A Synonym for Love can pre-purchase a prix fixe dinner from The Gladstone Hotel to be enjoyed before or after the performance. Seatings are at 5:30pm or 8:30pm and include an appetizer, a main course, and a dessert selected from the Gladstone's full menu.
Order your prix fixe dinner online or call 1-800-838-3006.

Get a room! All ticket buyers will receive a discount code for a night at The Gladstone, valid for the evening of their performance
baroque opera classical music in toronto gladstone hotel toronto handel new opera opera volcano theatre