[Toronto ON}  DRUMHAND is like nothing else you’ve seen or heard. A 5-piece percussive powerhouse, their sound is a glorious global brew that is at once primal and avant-garde, driven by the irresistible pairing of rhythmic drums to punchy horns. An infectious hybrid of sounds bordering on fusion and funk but far more 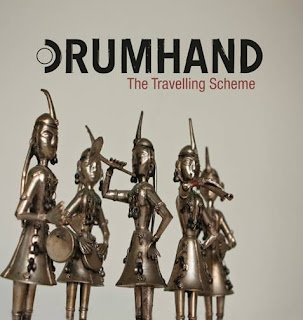 focused on fun, Toronto audiences will be moved to dance from the first beat at the band’s release of The Travelling Scheme, at C’est What on Sept 20!

Beginning with the heartbeat – the very rhythm of life – DRUMHAND sets their colourful stage while sax and trumpet chart courses traversing the shores of Brazil and Cuba, by way of Ghana and the Crescent City. The urgency of the drums, the stop-and-start nature of their multi-syncopated attack and the otherworldly skronks from strong, well-placed brass punctuations have created a progressive template for record-breaking live shows.

Think front-line marches with enough singing and rhythmic shouts to keep you guessing and moving to the substantial groove.  Point and counterpart merge with jazz-like squalls of sax, punchy trumpet blasts and forward-looking attitude. Their goal, as a band, is to spur movement. 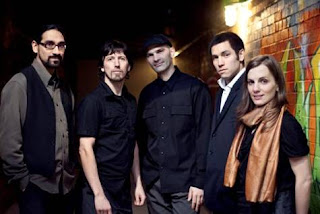 from beyond the globe, their music is punctuated by sharp, jazz-like excursions from Ali’s elastic sax work and Hennessy’s colourful bursts. Vocals have become a larger influence on their work but their ensemble work recalls the African spark and soul of Osibisa and the resilient, restless spirit of the N’awlin’s Dirty Dozen Brass Band.

“Lullaby for the Neighbours” is a thoughtful response to neighbour’s sound complaints, driven by its chorus of hand drums and Ali’s animated sax. The title track – with a tip of the hat to travel and motion, their tendency to march through a crowd – approaches a jazz feel with its dramatic horn interplay and criss-cross rhythms. While “River Parade” chronicles a scene on the Gatineau River, featuring buoyant rhythms and aggressive horn movements, “Get Ready” explodes with the eternally happy sound of drums driving drums and a chorus of voices egging them on and lifting the mood into the dance zone.

Which is what it’s all about – a happy, joyful sound to buoy a world tired of being beaten down by hardship. DRUMHAND is all about celebrating life and of providing a soundtrack for those in need of uplifting.