• Check the link for all their upcoming dates including throughout Europe in September and North America (including Montreal, Vancouver & New York City) in October

One of the most inspiring success stories in the global music scene, fearless Congolese band STAFF BENDA BILILI is back with its long-awaited follow-up album Bouger le monde

Staff Benda Bilili are back with a new album titled "Bouger le monde." Meaning to "move the world" or "make the world shake"— it refers to several things at once: 1. their wish to modestly contribute to 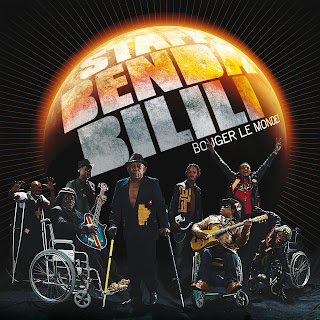 changing the world (through the message conveyed by their music and their attitude); 2. their will to help change their own, local world; and 3. their firm intention to get their audiences to get up on their feet and dance!

In between their last wildly successful album release and world tour, Staff Benda Bilili have added a few new members and their young guitarist who plays a one stringed lute he designed and built himself out of a tin can has returned. But through all the changes the band has seen, their mission remains the same- to move the world!

Everyone must know their story by now: formed by paraplegic street musicians who, at the time, slept on the streets of Kinshasa and rehearsed in the half-abandoned city zoo, STAFF BENDA BILILI conquered worldwide audiences and media thanks to their enchanting music, their relentless energy and their uplifting optimism. Upon the 2009 release of their first album, Très Très Fort (Crammed Discs), the band instantaneously became one of the most emblematic African bands around, as well as a symbol of resilience and triumph over adversity.

Released in movie theatres and on TV, "Benda Bilili!", the feature film dedicated to the story of the group was a sensation at the Cannes film festival, and achieved a high level of success. As for the "Très Très Fort" album, it won several awards and sold upwards of 150 000 units. STAFF BENDA BILILI have toured nonstop for the last 3 years, and they keep performing in front of a constantly growing number of devoted, fervent fans. The band have appeared in the largest festivals & concert halls across Europe, Australia and Japan.

This new album, recorded once again in Kinshasa, DRC, contains a collection of 11 superb songs, and benefits from the musical transformations which gradually took place during Staff Benda Bilili's 350+ shows: the band are louder and rockier, their level of musicianship has further risen, and the adjunction of three new members brings richer textures and added excitement to the arrangements: drummer Montana had joined the band right after the recording of the 1st album, lead guitarist Amalphi is a new recruit, and young percussionist Randy (who played with the Staff when he was a kid, and later vanished for a couple of years) is back in force. 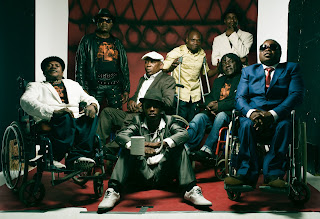 Another significant innovation is that the lead vocal duties are now shared between no less than seven singers: in addition to Coco, Ricky and Theo (who sang most of the songs until now), bass player Cavalier, drummer Montana, "hype-man" Kabose, and Roger (he of the amazing tin-can-and-string solos) are all featured as lead vocalists on the album, which contains lyrics in no less than four different Congolese languages, plus the customary sections in French.

Bouger le monde (Crammed Discs; release: September 3, 2012) wonderfully translates the band's new sound: it's more powerful and sophisticated, yet retains and showcases all the idiosyncratic qualities of their makeshift instruments, and is as lyrical and moving as it ever was.

The album was produced once again by Crammed's Vincent Kenis (of Congotronics fame) who, this time, didn't set up his mobile studio in the zoo, but in the old Renapec studio, where legendary rumba/soukouss stars such as Franco, Tabu Ley, Papa Wemba and Pepe Kalle recorded some of their best work. 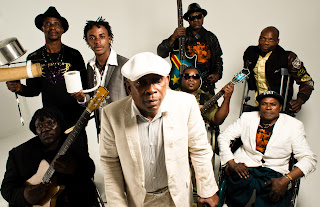 Let's mention finally that STAFF BENDA BILILI are still living in Kinshasa. Although success has changed ther life conditions (each of the band members now has a house, or is building one; they've bought new motorbikes, and they can now afford to send their children to school), they aren't considering moving to anywhere else on the planet. They say that they would be cut off from their roots if they did. And they've set themselves a goal: they're eager to help disabled people and homeless children around them to get homes and jobs, and are founding a school which will give them professional tuition (in mechanics, carpentry, music and computer science). They've just created an NGO for that purpose.