Angolan artist Don Kikas made a visit to Toronto last week, playing a couple of gigs for the Angolan community courtesy of Massemba Productions. I ran into him at a party and got a copy of his latest CD, Regresso A 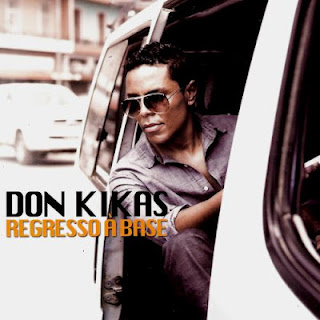 Don Kikas, aka Emílio Camilo de Carvalho, was born in the city of Sumbe in the southern Angolan province of Cuanza Sul and grew up in Brazil and Portugal, where he began his musical career.

The music of Angola has a lot in common with that of Brazil due to its shared Portuguese colonial past and the music is a seamless blend of influences.

The CD is full of irresistable rhythms and Latin-flavoured grooves, topped by his expressive vocals and nimble guitar lines. It ranges from big band Latin jazzy tunes to softer dance material to more traditional Angolan sounds.

He tells me that from his beginnings in dance music, he has a renewed interest in the traditions of his native Angola. "I'm getting old!" he laughed (not that you'd notice).

Angolan music isn't well known in North America but consists of various styles, including semba - often called the roots of Brazilian samba - and kizomba, a style akin to Central African zouk or a mixture of jazz and Caribbean influences underpinned by a relentless beat. You'll also hear Cuban rhythms, occasional accordion and harmonica (common in the style known as rebita) and naturally, all of it is danceable.

The album features a few guest artists, including Zoka-Zoka on Semba de Largada, Os Tenuza in N'gaieta and Yannick on Novo Mwangolé. I had trouble picking favourite tracks, but I loved Semba de Largada and the Central African drenched N'gaieta.

He'll be back in town in November and there are hopes for a live gig.