On June 19th, the U.S. Department of State raised the curtain on its groundbreaking cultural diplomacy initiative, Center StageSM, which is bringing performing artists from Haiti, Indonesia, and Pakistan to the United States to engage American audiences in 60 medium- and small-sized towns and cities.

Center StageSM builds on Secretary of State Hillary Rodham Clinton’s vision of “smart power,” which embraces the use of a full range of diplomatic tools, in this case the performing arts, to bring people together and foster greater understanding.
One of the next groups arriving is the whimsical Papermoon Puppet Theatre from Yogyakarta 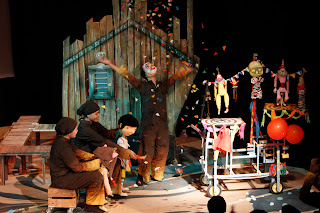 Drawing on the hip, youthful vibe of Indonesia’s preeminent college town and arts hotspot Yogyakarta, the company uses the whimsy and seeming innocence of beautiful, simple puppets to create multimedia performances that tackle political persecution and the personal side of history, in a way that promises to bring Indonesian history home and spark dialogue among audience and artists.

Exploring global traditions and popular imagery, Papermoon will tour the U.S. in August and September 2012, as part of Center StageSM (www.centerstageUS.org). An initiative of the U.S. Department of State’s Bureau of Educational and Cultural Affairs, Center Stag e brings compelling contemporary artists from Haiti, Indonesia, and Pakistan to the United States to engage the American people in cultural diplomacy as a way to create opportunities for greater understanding. Administered by the New England Foundation for the Arts, with funding from the Asian Cultural Council, the Robert Sterling Clark Foundation, and the Doris Duke Foundation for Islamic Art,this public-private 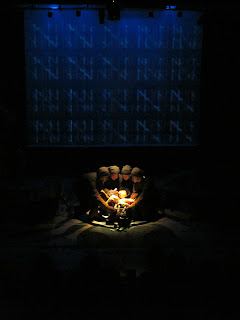 Papermoon will bring a unique view of contemporary Indonesian life—of personal dynamics, deep emotional moments, and hidden family secrets—to American audiences with their full-length work, “Mwathirika.” This chilling drama chronicles the impact of politically motivated mass violence on the inner world of families. Papermoon has created a historically based, universally moving account of a bloody period in Indonesia’s modern history, the persecutions, executions, and mass jailings that took place in 1965, often called the Year of Living Dangerously.

“Though our work is based on family stories, the things that these stories are about have happened around the world,” reflects Papermoon’s artistic co-director and founder Maria Tri Sulistyani. “We want to share ‘Mwathirika’ with Americans because we want all of us to understand, so it will never happen again. Anywhere in the world.”

Indonesian traditional shadow puppetry (wayang kulit) has a worldwide reputation, yet Papermoon has taken an entirely contemporary path - albeit sometimes tinged with its one heritge. “We never incorporate traditional elements intentionally. I never choose certain movements or sounds, but the elements sometimes sneak in,” Sulistyani explains. “We’re taking the stories from Indonesian life, about history and society. Many friends from outside Indonesia have commented that while it’s not traditional puppetry, they can see how we move and play with tradition. It just happens.”

Sulistyani and her husband and company co-director, painter and sculptor Iwan Effendi, never intended to become master puppeteers, either. Sulistyani had longed to pursue a career in visual arts, but decided to study Communication in college at the urgings of her concerned parents. However, the stage also called, and she joined a theater troupe. “But I didn’t want to be an actress,” Sulistyani recalls. “I wanted to create things, to draw and paint. I wanted to do both visual arts and performance.”

After graduating, she and Effendi started a little studio in her Yogyakarta neighborhood, a creative place where local kids could come and hang out and make art. Working with children, they felt the delight and excitement of crafting puppets. They used rattan and bamboo, cardboard and whatever found objects were at hand. They staged small performances. It was sheer fun.

However, when Sulistyani and Effendi saw a visiting German puppet company stage Shakespeare, they knew puppets could do more than entertain and amuse. “‘Let’s try this,’ we said,” Sulistyani recounts. “‘Let’s start a puppet theater for grownups.’” To do so, they drew not only on Effendi’s love of Japanese animation and the illustrations from children’s books they adored, but traditional masked performances and puppetry approaches from around the world. Papermoon was born, aiming as its name implies to make something both simple and ordinary, and absolutely huge at the same time. Sulistyani, Effendi, and their fellow puppeteers soon rocked the Indonesian arts scene with a politically controversial, sexually honest piece, “Noda Lelaki di Dada Mona (A Stain on Mona’s Chest),” aimed clearly at a mature audience.

“Mwathirika” treads on similarly challenging ground. It flowed from Effendi’s longtime interest in Indonesia during the mid-1960s, when anti-communist agitation under then President Sukarno led to murder, prison, and broken families for millions of Indonesians. Effendi’s grandfather was imprisoned for thirteen years without trial. Though general historical accounts address this period, few people discussed their harrowing personal experiences.  The public discourse chronicled dates and numbers, but no stories.

Papermoon set out to change that, framing its fable of unflinching emotional touchstones in a non-verbal narrative about two families torn apart by turmoil, violence, and loss. Choosing the Swahili word for victim as the title, the company hoped to set aside cliché notions about that time in Indonesia, and also to highlight that politically driven atrocities are not unique to a particular people or nation. 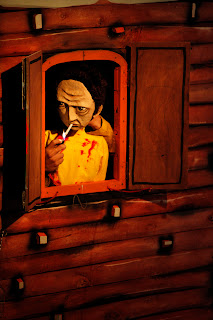 “We went to our parents or grandparents or neighbors, people who lived then and asked them to share their real feelings in that period. What they felt like when night was falling, losing family members, trying to save themselves or survive as orphans,” notes Sulistyani “Since the late 1980s, we’ve just heard the government’s side. It’s too much and totally different from what happened.”

Papermoon strives to do more than present new facets of Indonesian history in a broadly accessible, profoundly moving way. “We want to bring a mirror and reflect how artists can work,” Sulistyani muses. “We’d love to share everything with people. Especially how puppetry can bring a story, even a very difficult, complicated story, to so many people.”

Center StageSM will bring 10 ensembles from Haiti, Indonesia and Pakistan to the U.S. for month-long tours from June-December 2012, connecting artists with diverse communities across the country. Residencies will include performances, workshops, discussions, people-to-people exchanges, and community gatherings. Keep up with Center Stage by liking the program on Facebook (http://www.facebook.com/CenterStagePage) and following us on Twitter (@centerstageus).

Center StageSM is a public diplomacy initiative of the U.S. Department of State’s Bureau of Educational and Cultural Affairs. It is administered by the New England Foundation for the Arts in cooperation with the U.S. Regional Arts Organizations, and with additional support from the Robert Sterling Clark Foundation, the Asian Cultural Council, and the Doris Duke Foundation for Islamic Art. General management for Center StageSM is provided by Lisa Booth Management.