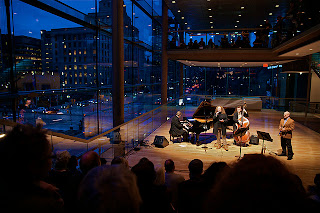 • Performances take place most Tuesdays and Thursdays at noon and some Wednesdays at noon or 5:30 p.m.
• Tickets are distributed at the door 30 minutes prior to the performance on a first-come, first-served basis, subject to availability.

TORONTO - The Canadian Opera Company’s popular Free Concert Series in the Richard Bradshaw Amphitheatre, generously underwritten by Peter A. Allen, returns with 10 months of captivating programming that showcases established artists and rising stars from Canada and around the world.

The Canadian Opera Company’s popular Free Concert Series in the Richard Bradshaw Amphitheatre, generously underwritten by Peter A. Allen, returns with 10 months of captivating programming that reflects the richness of Toronto’s cultural fabric and showcases established artists and rising stars 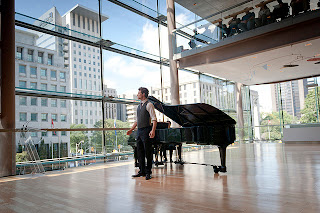 from Canada and around the world.  The inaugural concert of the 2012/2013 season on September 18, 2012 at 12 p.m. is the annual audience favourite introducing the young artists of the COC Ensemble Studio in a program of their favourite operatic arias. \

The 2012/2013 season features over 400 artists in 77 concerts and dance performances, including world premieres of newly commissioned works by the Canadian Art Song Project and Queen of Puddings Music Theatre, and exciting new creations by Ballet Creole and Nova Bhattacharya.  First-time Free Concert Series performances include appearances by: 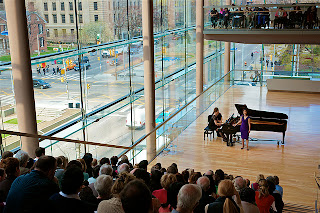 - Italian saxophone sensation Francesco Cafiso
- the dance stylings of Jade’s Hiphop Academy
- and unique instrumentations such as the Kaleidoscope Recorder Ensemble and Aruna Narayan, the only woman in the world to professionally play the sarangi, an ancient North Indian bowed instrument considered one of the most difficult to master.

Also featured for the first time in the Free Concert Series are the Christina and Louis Quilico Awards, in a special early evening presentation in May 2013. From jazz to dance, classical to contemporary, and spanning the globe from China to South America, the Free Concert Series brings diverse musical experiences to 15,000 people annually from September to June in the intimate, light-filled Richard Bradshaw Auditorium at the Four Seasons Centre for the Performing Arts.
canadian opera company classical music free concerts in toronto free lunchtime concerts in downtown toronto Indian classical music opera