NEW YORK CITY - Due to overwhelming demand, the hit show and singles event, Never Sleep Alone (NSA) is returning to Joe’s Pub on Friday nights for a limited fall run beginning September 14th and concluding November 2nd, The production will then move to London for a Winter/Spring run. 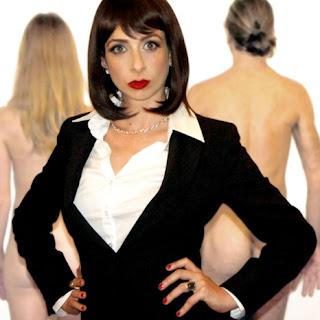 NSA draws an attractive, affluent and adventurous audience of straight and gay singles who are actively seeking their next hot romance. An after-party at a nearby hotspot follows the show.  NSA is the perfect Friday night out for adventurous singles and all lovers of unique and interactive comedy.

Since opening on November 10th 2012, NSA has received rave reviews, including feature articles in The New York Times, Time Out New York, and the United Kingdom’s Daily Mail. Sexual evangelist and self-help author Dr. Alex Schiller (Roslyn Hart) leads her audience through an unforgettable night of comedy, music, and on stage demonstrations as she teaches singles how to overcome their inhibitions, interact with each other and make that next hot hookup happen. The night continues at the NSA After Party, with the always-secret and sexy location announced at the end of the show.

During the hilarious and highly interactive show, “singles” mix at communal tables in front and become active participants in the show while “voyeurs” watch from the back. SINGLES are given discounted tickets and free champagne, but they must be willing to interact with Dr. Alex and one another during the show. Timid audience members and people in relationships should sit in the VOYEURS section. Dr. Alex has a Hook Up Hotline where audience members can anonymously report their experiences. Since opening in November 2012, hundreds of reported hook ups have resulted from the NSA show and after-party. 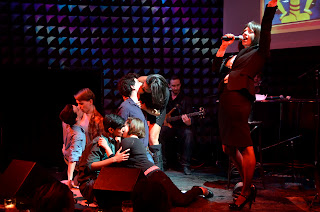 Readers interested in participating in an on-stage date or demonstration can send their request to NSAshow@gmail.com.   Readers who would like to report NSA Hook-Ups from a previous show can call the Hook Up Hotline at 917-830-3672.

About Roslyn Hart:
Roslyn Hart is a New York based writer, performer and producer. She was named one of the Top Ten Live Performers of 2011 and one of the 50 Funniest New Yorkers by Time Out New York. Her uninhibited performance style, subversive material and brilliant improvisation has earned her audience praise and rave critical reviews. Roslyn has been featured by The New York Times, Time Out New York, The New York Post, The Village Voice, NEXT Magazine, The Brooklyn Rail, and New York 1. She was also a guest star on the hit HBO show, Bored To Death.