All of us are better when we're loved.

TORONTO - Tarragon Theatre kicks off its 42nd season with a revival of the acclaimed No Great Mischief, written by the award-winning playwright David S. Young, adapted from the novel by Alistair MacLeod. Directed by Richard Rose, Artistic Director of Tarragon, this riveting drama, rich in music 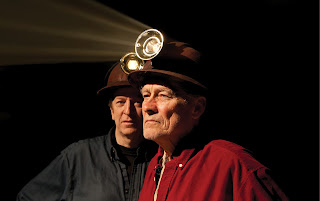 and storytelling, previews Tuesday September 11, opens Wednesday September 19 and closes Sunday October 21, 2012 in Tarragon Theatre's Mainspace. Tickets range from $21-$53 (inclusive of HST) and are available by calling the box office at 416.531.1827 or by visiting www.tarragontheatre.com

Tarragon originally premiered No Great Mischief in 2004, after which it travelled to Ottawa and Halifax. Filled with music and passion, family history becomes myth in this tale of a Cape Breton family and the love that runs deeply within it.

Haunted by the stories and songs of their Scottish ancestry, two brothers (Fox and Thomson), seek to reconcile their difficult past in this sweeping saga of familial love and loss. A bittersweet rumination on the ties that bind, this evocative memory play takes us from a squalid Kensington Market rooming house to Cape Breton's stormy shores and the deep mines of Elliot Lake.

David S. Young was born in Oakville, Ontario, and studied at the University of Western Ontario. He is the author of seven plays, two novels and several screenplays and teleplays. Two of his plays, Inexpressible Island and Glenn (originally produced by Necessary Angel and directed by Richard Rose) have been nominated for multiple Canadian drama awards. Young is a founding director of the Writers' Trust of Canada and a trustee of the Griffin Prize for Excellence in Poetry.

Alistair MacLeod was born in North Battleford, Saskatchewan, in 1936 and raised among an extended family in Cape Breton, Nova Scotia. He has published two internationally acclaimed collections of short stories: The Lost Salt Gift of Blood (1976) and As Birds Bring Forth the Sun (1986). In 1999, MacLeod's first novel, No Great Mischief, was published to great critical acclaim, and was on national bestseller lists for more than a year. The novel won many awards, including the International IMPAC Dublin Literary Award, the Dartmouth Book Award for Fiction and The Trillium Award for Fiction. 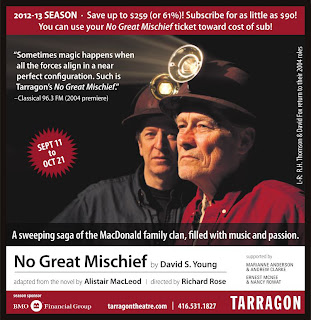 Tickets range from $21-$53  (Discounts for students, seniors and groups)
Tickets can be purchased through the box office at 416.531.1827 or visit www.tarragontheatre.com
- $13 Rush Tickets available at the door for Friday nights (on sale at 6pm) and Sunday matinees (on sale at 1pm)
canadian theatre tarragon theatre theatre about family toronto theatre scene