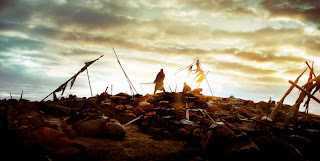 Kings are made not born.

But at what cost? asks this gorgeous historical drama about the life of Emperor Liu, the first ruler of the Han Dynasty as he recounts his story from his deathbed in the spring of 195 B.C. Lush cinematography and a compelling story of rivalries, intrigue and the corrosive nature of ambition unfold in young Chinese director Lu Chuan's epic film.

The action shifts back and forth between the present, as he lies in his chambers surrounded by servants, politicians, concubines and his wife the Empress, and the past. As he tells the story, he had only two mortal enemies in his life - Lord Yu and General Xin, but in the beginning all three were comrades in arms, united in their quest to rid the country of the despotic Qin Empire. He was a commoner, Liu Bang from Pei, 48 years 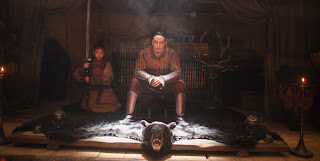 old when he first met Lord Yu, by then already a great general and leader of the rebellion. The younger Yu has everything - a powerful army, a handsome face and the most beautiful wife. The three spend years on the battlefields in their quest to rid the country of the Qin Empire. It is Liu who is first to reach the fabulous Qin Palace and capture the reigning Qin Emperor and ironically, it is that moment of victory that sows the seeds that would destroy their alliance.

...after I entered Qin Palace a door was unlocked and I saw that deep within my heart ambition raged like an ocean.

Comrades in arms become rivals and then finally mortal enemies as the trio splinters over their hunger for the spoils of the empire. Court ministers, politicians, even the female characters have their own hierarchies and tensions; no one escapes the corrupting effects. The descent from liberating rebellion to paranoid 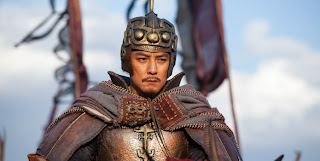 dictatorship is a theme that resonates through world history to the present day more than 2,000 years later.

Filmmaker Lu Chuan meticulously recreated the details of the period, having spent months studying historical documents and consulting experts in the era to reproduce the clothing, weapons and architecture. That sense of authenticity extends to the court customs and mannerisms; the actions of the royal house and generals are accompanied by the ever present and ritualized movements of the many servants as they flit about in observance of their duties. All that attention to detail is augmented by a poetic sense of camera work and an artist's sense of composition. Battle scenes are a violent, stylized dance. Every frame of this film is beautifully composed and the sum of the effort is quite stunning visually.

The acting is equally convincing, including very strong performances from the trio of ultimate rivals - Ye Liu as Liu Bang, Daniel Wu as Lord Xiang Yu and Chang Chen as General Han Xin. In its quest for accuracy, the film takes on a famous event in Chinese history, the so-called 'Banquet at Hong Gate' where the simmering rivalry

between Liu and Yu bubbled to the surface and resulted in an assassination attempt against Liu that he barely escaped... but with whose aid?

Chinese censors blocked the original domestic release of the film earlier this summer. Perhaps it was because he meddled with this canonized era in history, or perhaps it was the overriding theme of the film - that rivalry, intrigue and their violent offspring have long roots in Han culture.