Toronto, October 3, 2012 – Canadian Stage presents Tear the Curtain!, the genre-bending West Coast hit that moves from stage to screen and back again. An Electric Company production in association with Vancouver’s Arts Club Theatre Company, Tear the Curtain! is a stylish psychological thriller and a groundbreaking, hybrid stage experience that combines live theatre and film. 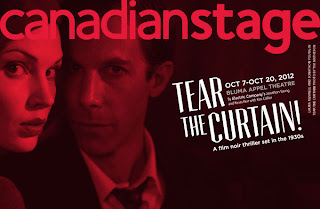 Tear the Curtain! will be on stage from Sunday, October 7 to Saturday, October 20 (opening and media night Tuesday, October 9) at the Bluma Appel Theatre in the St. Lawrence Centre for the Arts (27 Front St. E). Tickets from $24 to $99 are available by phone at  416.368.3110 , online at www.canadianstage.com, or in person at the box office.

Created with and directed by Canadian Stage resident artist and Siminovitch Award-winner Kim Collier, and written by long-time Electric Company collaborators, artistic associate Jonathon Young and artistic director Kevin Kerr, the production follows Alex Braithwaite (played by Young), a jaded theatre critic in a gritty film noir rendition of Vancouver in the 1930s, as the advent and popularity of the “Talkies” threatens the existence of theatre. When Alex falls for the screen siren Mila, he’s caught dangerously between two warring mob families: one controlling the city’s playhouses, the other, its cinemas. Alex tries to tear through the artifice and war between these art forms without selling his soul – or losing his mind. Devised as a detective story, the plot unravels on stage in a seamless blend of filmed and live performance, leaving the audience to decipher which medium they are seeing.

“Tear the Curtain! is a penetrating examination of art – what we want or expect from it,” said Matthew Jocelyn, Artistic & General Director, Canadian Stage. “Opening our 25th anniversary season by sharing this incredible multidisciplinary adventure that fully embodies our company’s artistic mandate, from our resident artist Kim Collier and past collaborators, Electric Company, is very exciting. Prepare to be dazzled.” 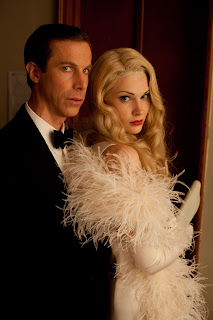 Featuring a talented cast that includes David Adams, Scott Bellis, Craig Erickson, Hiro Kanagawa, Tom McBeath, Laura Mennell, Dawn Petten, Gerard Plunkett, James Fagan Tait and Young, this production of Tear the Curtain! is a re-imagining of the original show that was presented in Vancouver in 2010. Developed over several years, beginning with a commission from Vancouver’s Arts Club Theatre, the piece was originally inspired by the Stanley Theatre’s dual identity as a live theatre and former cinema. A three-week film shoot resulted in 70 minutes of edited footage that comprises approximately half the production. With an updated and revised script, this remount features the original cast and is supported by the same creative team.

“Tear the Curtain! wages a battle between ideas, but there is no real fight here between stage and screen – it’s more like a conversation between the two mediums,” said Collier. “I hope audiences join us on this quest for an authentic expression of self in a world of imitations and stereotypes, and allow themselves to come along for the ride as the story unfolds.”

Dawn Petten and Jonathan Young in Tear the Curtain! Photo by Tim Matheson

About Tear the Curtain!
October 7 to 20, 2012; Opening and Media night October 9
Tear the Curtain! will be on stage at the Bluma Appel Theatre in the St. Lawrence Centre for the Arts (27 Front Street East). Performances run Tuesday through Saturday at 8 p.m. with matinees on Wednesday at 1:30 p.m. and Saturday and Sunday at 2 p.m.
The performance runs 2 hours and 30 minutes, with one intermission.
Tickets from $24 to $99 are available online, by phone at  416.368.3110  or in person at the box office. Discount tickets available thanks to Sun Life Financial, Discount Ticket Programs Sponsor. For details visit www.canadianstage.com.