Lights and Bold Action:
Lo’Jo Dramatic Journey from the Sahara to the Caucasus and Back (to Anjou) on Cinéma el Mundo
(World Village - October 9, 2012)

Night is giving way to a new day. Crickets scratch the satin-dark tropical air. We could be on Reunion Island, in Bamako, deep in the Caucasus.

Then a gentle pulse seeps over the horizon like the dawn. The journey begins. The destinations, the ports and havens of wonder along the way are multicolored and richly painted. Over an hour later we arrive at the final act. The song “Au Debut,” growled in sage tones by singer and composer Denis Péan, brings us back to where we began, to a night that’s giving up its fight with the dawn, to the beginnings of time.

This is Cinéma el Mundo (World Village; U.S. release: October 9, 2012). A world full of image, color, sound, and story--and a striking group of musical guests, from British rock maverick Robert Wyatt to desert blues guitar master Ibrahim Ag Alhabib (Tinariwen) to avant-global cellist Vincent Segal (Chamber Music). It’s all there: a woman called Lila who leaves before dawn, the mosques that form a string of pearls around the neck of Algiers, two rusted hulks in the port of Buenos Aires, a blue titmouse in an instant of pure air, dragons sliding over roofs above the market in Vientiane, dreadlocks in an Occitan passageway, the flow of people escorted through a neighborhood of flies by a proud fanfare of stars.

2012 is Lo’Jo’s thirtieth year of existence, and Cinéma El Mundo is their tenth album. The band was born on the margins, in and around Angers, the city that slumbers securely in a crook formed by the Maine and Loire rivers in the west of France. They have stayed on the edges ever since, musically, geographically, philosophically. “To live on the margins is just a way of remaining true to one self,” Péan says. “There was a time when it seemed as if it was very hard to exist far from Paris. Right now it only seems like an immense advantage.”

But their fecund province, with its gentle skies and rolling hills, its marching vineyards and wide lazy rivers is no prison for vegetative attitudes and small-mindedness. Anjou has bred big dreams in Lo’Jo, dreams that have transported these musical adventurers to every point of the compass, and back. Their trunk full of sounds and instruments is thickly plastered with the labels of their travels; The southern 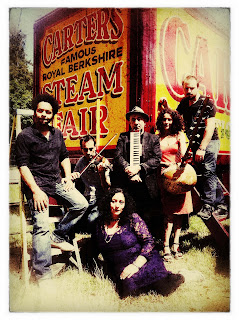 Sahara, where they helped to organize the very first Festival in the Desert in 2001, and subsequently launch the international career of the Touareg poet-guitarists Tinariwen; Tbilisi and the Caucasus, where their Babel Caucase caravan stopped over en route to Chechnya; The Reunion Islands in the southern Indian Ocean, just one of Lo’Jo’s many homes away from home.

From all these horizons, Lo’Jo bring sounds, instruments, experiences and friends back to the blank canvas of their native land. “I come from a region where there is no specific musical culture, no folklore,” Péan says. “So I make fire out of every kind of wood.” The band’s musical DNA is so complex and intertwined that your only reward for trying to sequence it will only be frustration and sterile science. What matters is the living breathing whole. Lo’Jo sound like the harmony that the builders of Babel Towers sought but never found, like Nino Rota on a non-stop round the world ticket, like the antidote to globalization’s reductive evils, like a hymn to variety, to the human circus in all its incarnations. To listen to one of their albums is to travel with the heart open, always fresh to bitter-sweet wonders, not possessing but praising, savouring everything along the way.