Reclaiming the Song: Stunning Albanian Singer Elina Duni Takes Balkan and Jazz Sounds Beyond the Mountain
Elina Duni and her high-calibre jazz band shine on Matanë Malit, her thoughtful debut release on ECM, and on their first U.S. tour in October, 2012
including Washington, D.C., Baltimore & New York City - see below

Matanë Malit (“Beyond the mountain”; U.S. release: October 16, 2012), Elina Duni’s ECM debut, is an homage to Albania. A singer looking at her roots from a present-day vantage point as a musician engaged 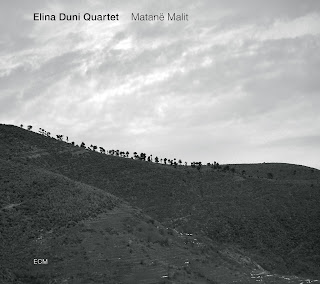 in improvisational processes. Jazz experience informs her exploration of Balkan folk songs – with attention to atmosphere, the shape of the sound, the tactility of the structures, the implications of the words, … “It’s about serving the song”, she explains, “and about reclaiming and reinventing it."

Duni was just 10 when she left Albania in 1992, and found her route to its songs only after forays into classical music, blues and jazz standards. At the urging of pianist Colin Vallon, she began to sing in Albanian in their duo, formed in 2004 while both were studying at Berne’s Hochschule der Künste. “I fell in love with the old songs, and discovered that not only could I sing them and feel them but that this was really my voice, emerging in a very natural way. It was as if, it had been waiting to be activated”, she says. As a child growing up in Tirana, Duni had had little contact to folk music. Folklore, co-opted by the state, had become agitprop material for socialist themes, and Duni’s family – like many intellectuals and artists - distanced themselves from it.

Now however she began to explore in earnest, digging deeper into the region’s troubled history, uncovering many songs of real beauty and power, older songs from her homeland and from its vast Diaspora. Matanë Malit includes songs of lovers, heroes, workers, shepherds, exiles, songs of resistance - traditional songs arranged by Elina Duni, and new music expressively molded in the tradition. 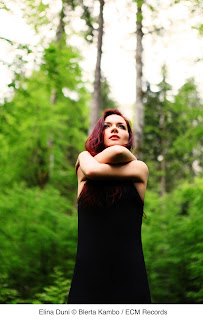 Over the last several years, her quartet has bloomed into a subtle unit of broad artistic reach. The players seem to get inside the texts. “We focus all the intensity that this poetry needs. We have tried to convey its essence through our musical interpretation. To me, all improvised music is a jazz state of mind. We feel no obligation to play a song the same way twice.”

Colin Vallon, who has long counted singers amongst his most profound influences, often seems like an answering voice at the piano. Bassist Patrice Moret brings his keen choice of notes to both the Elina Duni Quartet and the Colin Vallon Trio, and interacts persuasively with drummer Norbert Pfammatter. Leader Duni recognizes that it is what they create together that is important. “I never wanted to be a singer with backing trio. From the beginning I gave a lot of space to the musicians for improvising, and experimented also with my voice. It’s another instrument. Over time, we have built up an understanding that allows us to go anywhere...”

After two albums for Meta Records – Baresha and Lume Lume (2008 and 2010) Matanë Malit takes the work to the next level. The new album was produced by Manfred Eicher at Studios La Buissonne, near Avignon, in February 2012.

The Duni Quartet takes its music on the road this autumn and winter, with concerts in the USA, France, Germany, Switzerland and Austria.
October 23, 2012
Seattle, WA
Poncho Concert Hall at Cornish College of The Arts, 710 East Roy Street 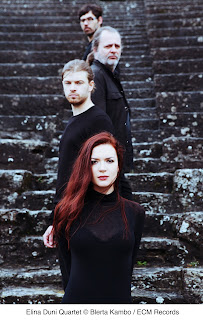