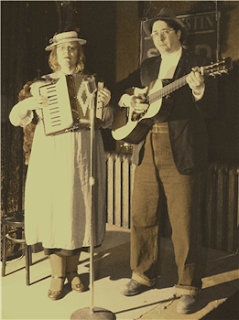 TORONTO – WEDNESDAY, OCTOBER 3, 2012 – Hillbilly swing duo HOTCHA! can now add “award-winning” to their bio, when they receive their Toronto Independent Music Awards (TIMA) on Saturday, October 6 at the Toronto Phoenix Concert Hall. The duo will also be performing the opening number amongst many other talented recipients.

HOTCHA!‘s short span performing has been filled with many festivals and events, such as Canadian Music Week, NXNE, Toronto City Roots festival, Winterfolk Festival and Festival on Bloor. They were selected for the Home Routes House Concert Circuit in 2010, to tour northern Saskatchewan and Manitoba…in February no less! They were chosen for the VIA RAIL program to play for guests aboard the train from Montreal to Halifax and for a complete Atlantic Canada tour , and now are recipients of the prestigious TIMA for the acoustic category. HOTCHA! is honoured to accept this award and to be in the company of so many talented artists. 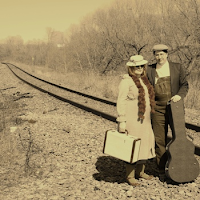 MORE ABOUT HOTCHA!... Born in the swamp. Raised on the mountain. Work in the mines. Play on the porch. Well, that's only true metaphorically. They don't actually have a porch. HOTCHA! (Beverly Kreller and Howard Druckman) nonetheless feel as though their music fits the description: Rustic, rural songs of work and faith, delivered with a vintage vibe and the energy of a runaway train. HOTCHA! creates a distinctive musical blend of old-time western, bluegrass, early swing and country gospel. If you could take a picture of HOTCHA!'s music, it would be a grainy, sepia-toned portrait of depression-era musicians with nothing but an old Sears-Roebuck guitar and a nickel in hand for the jitney dance. If you listen to HOTCHA!'s music, you'll hear a unique combination of accordion and bodhran (Celtic drum) alongside gritty guitar, wailing harmonica and soaring vocal harmonies. Their debut CD Dust Bowl Roots: Songs for the New Depression is intended as a true tonic for the times we live in.