(November 26, 2012 - Toronto, ON) – Back by popular demand, Raven Banner Entertainment and Ultra 8 Pictures announced the return of Steven Kostanski’s Manborg in an exclusive late night run at The Royal on the following dates: November 30th, January 11th, February 1st, and March 1st, all at 11:30pm. Detailed listings are available on The Royal’s website.

Raven Banner Entertainment and Ultra 8 Pictures
are proud to announce
Manborg
Opens Theatrically in Toronto November 2nd 2012
at The Royal - 608 College St.
and other Canadian cities (see below)

Toronto, ON – Raven Banner Entertainment and Ultra 8 Pictures are set to unleash demonic dictators and a vigilante cyborg on Canada with the theatrical release of Steven Kostanksi’s Manborg. Shot as a throwback 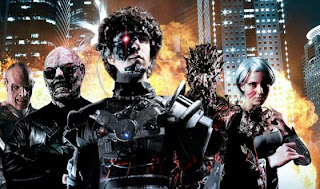 to ’80s sci-fi horror action films, Manborg tells the story of a dead soldier who finds himself reanimated as a cyborg killing machine, which Twitchfilm calls “a creative and hilarious love letter to the VHS sub culture”.

Half-man, half-cyborg: Manborg. Killed while battling the forces of hell, a super-soldier is brought back from the dead in order to fight an army of Nazi vampires and demons led by the nefarious Count Draculon. There’s an Australian punker, a knife-wielding anime chick, a kung fu master (voiced with deliriously pitch-perfect stoicism by Kyle Herbert, the narrator from Dragon Ball Z), and of course the titular Manborg, a literal cinematic Frankenstein of pulp sci-fi pop culture references.

Manborg, is directed by Steven Kostanski, the special effects prodigy of Winnipeg’s filmmaking collective Astron-6 (Father’s Day), who deftly juggles co-writing, editing and directing duties on a micro budget of below $2K with the ambitious creation of an extraordinary barrage of elaborate miniatures, iconic costumes and delirious stop-motion creatures. Most impressively, despite drawing from so many sources, Manborg’s universe remains unmistakably original, and as a director, Kostanki’s vision is unquestionably unique and his talent impossible to deny.

“Manborg is an incredible achievement” says Don McKellar, and  FilmThreat.com calls the film: “A glorious mixture of claymation, computer graphics, practical effects, make-up and a DIY ethic that’s above and 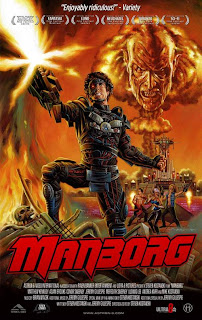 beyond most science fiction movies being produced. Manborg is a total  hoot.”

Gearing up for theatrical release of the cult hit film Manborg, Raven Banner Entertainment has just commissioned a new poster by the incredibly talented Toronto artist, Jason Edmiston (right), whose fondness for pop culture, especially movies and toys, often creep into his work and makes him the perfect artist to illustrate the awesome power of Manborg.

Manborg is being screened theatrically in the following cities:

Nov 10 – Halifax, Arclight
With an introduction by Jason Eisener (Hobo With A Shotgun)

More dates/cities to be announced!

About Ultra 8 Pictures
With an understanding of international festivals and markets, Ultra 8 Pictures offers consulting services in areas of acquisition, production, representation, sales and festivals for filmmakers, producers and distributers. For more information please visit: http://www.ultra8.ca