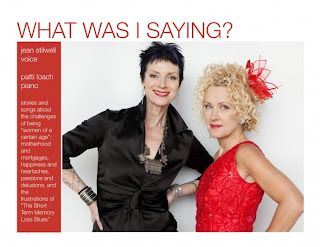 gets underway this weekend.

We are very, very proud of this show. Not only does it showcase Jean's still-lustrous voice gorgeously  - her "Lies of Handsome Men" will stop you in your tracks -  but it addresses many of the foibles that we are starting to address as we become, er, "women of a certain age".

Jean and I walked very different paths to get to where we are now: while I was raising my three beautiful boys, Jean was performing concerts and operas - Carmen - around the world. Still, we have a lot in common, not only with each other but with anyone who has a passion for life, good coffee, belly laughs, or is dealing with "The Short Term Memory Loss Blues".

Albert Schultz and his team have put together a whole weekend of stellar entertainment --- Brent Carver, Dennis Lee, Patricia O'Callaghan, and Judith Lander to name just a few --- and we are chuffed to join

Jean Stilwell is famous for her twenty-five blisteringly sexy Carmens in Canada, the US, Britain and Japan. In addition to acting as a co-host on Toronto's Classical 96.3FM radio show, "Good Day G.T.A.", she continues to perform on the opera, concert and cabaret stages.

Patti Loach has been playing piano since she was six. A graduate of classical music programmes at the RCMT and University of Toronto, she’s also mad for the American Songbook... and musical theatre, in general. Patti has written five shows that she has performed around the world with her friend and musical collaborator, Jean Stilwell.