“Round-the-clock care and three meals a day- all at the Canadian taxpayers’ expense. What’s not to be happy about?”- Jacqueline

Montreal - Infinithéâtre is privileged to present the world premiere of Alyson Grant’s Trench Patterns, the winner of their 2011 Write-On-Q! playwriting contest, from Oct. 23-Nov.18 at Bain St. Michel. Directed by 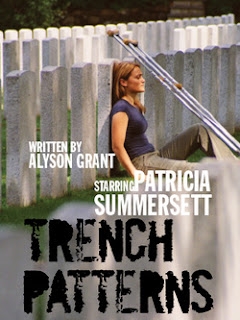 Jacqueline is a wounded Canadian Forces combat officer returned from Afghanistan after a mission gone fatally wrong. She is angry, intelligent and funny, traits she uses to keep her mind from the violent events of the day that broke her. Solace comes from ghostlike visitations including her great grandfather, Jacques, a French Montréaler conscripted into World War One and executed for desertion and cowardice. As she recedes into his haunted world, we see her slowly move closer to her own. Poetic, powerful and ripped-from-the-headlines relevant.

Director Guy Sprung is delighted with this play from a very exciting Write-On-Q! winner, “First-time playwright Alyson Grant’s work is a moving piece of writing about an issue front and centre in the Canadian psyche.” For Sprung, Trench Patterns asks the questions; it does not attempt to provide easy answers, “Is there such a thing as a ‘just’ war and a ‘good’ soldier? Alyson Grant has given us Jacqueline, a Québecoise heroine who is a metaphor for the soul-searching the whole country should be engaged in. How did a first time playwright write such an entertaining play about such a dark subject?”

Playwright Alison Grant, head of the English Department at Dawson College, was drawn to writing this play while increasingly feeling a media-drenched numbness hearing news about Canadian soldiers in Afghanistan and their often troubled readjustments once home, “The play takes a very current and complex reality- soldiers back among us after their time in Afghanistan- and explores the complicated ways in which those who come home broken might heal.” She continues, “I was surprised at first to find this funny, sarcastic character making her way onto the page and then helpless as she brought me into some very dark and uncomfortable places.” What resonates for Grant are the various issues around these circumstances, “On one level, we have the big questions about war and its effect on the individuals who fight in them, and on the

other we have a play about families and the stories that run through them.”

Patricia Summersett, who plays Jacqueline, grew up in small town Michigan and many of her childhood friends went into the military. She became an artist, and always wondered how that happened, “When did we actually make those decisions for ourselves? What does it mean for us now and what it will mean for us in 50 years? How do we get to celebrate each other? I love that this play is about people, about relationships.” She adds, “Jacqueline also reminds me that I should make more jokes.” This is James Soares-Correia’s first professional role, for him “the play is a beautiful mix of shocking reality and haunting imagination.”

Set designer Cassandre Chatonnier was touched by this play that deals with the passing down through the generations, beyond genes, “History and the wounds of war are transmitted from generation to generation- my own great-great grandfather was in the first world war, my great grandfather in WWII, and my grandfather in the war in Algeria. The story of an entire family is marked by these events.” The design is completed with Audrey Chikhani’s authentic war costuming, Julien St-Pierre’s effective lighting and Nikita U’s original score and video design. Michael Panich is the stage manager. Many thanks to military advisor Major Victor Knowlton (Retired) for his invaluable help maintaining the veracity of this important piece. 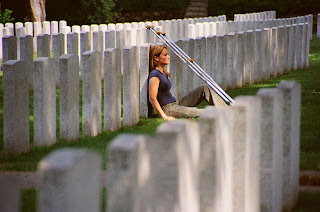