Recent Release: VERY BE CAREFUL - ¿Remember Me From The Party?

If you ever experienced Very Be Careful’s live show, you certainly remember them as some unapologetically untameable vallenato wildmen.

¿Remember Me From The Party? is VBC’s 6th studio album and in it, the Los Angeles-based quintet keeps exploring the roots of authentic vallenato music in their characteristic style that’s at the same time respectful of the Afro-Colombian traditions while adding high-octane doses of punk unpredictability to the mix.

Inspired by their parents record collection, brothers Arturo and Ricardo Guzmán, Dante Ruiz, Craig Martin, and Richi Panta founded Very Be Careful and set out to play exclusively accordion-driven Colombian vallenato back in 1997, ages before cumbia crossed over to the cosmopolitan crowds of the northern hemisphere. Keeping true to the original mission 15 years later with the same five original members of the band they have toured the US and the world as the undisputable ambassadors of the genre.

Some of Very Be Careful’s biggest fans live in Japan, where it tours often as well as the UK. And the group’s sound has been embraced by pop-culture lightning rods like Kronos Quartet and Vampire Weekend, which they performed as openers including Jack White recently. At home the band makes a grand occasion for sin 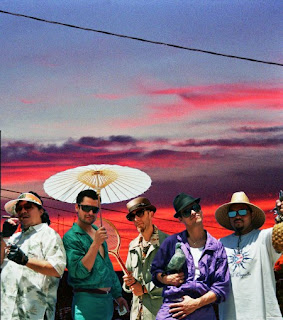 and their loyal heterogeneous fans are used to expect the unexpected from them.

On their newest album they include five covers of classic Colombian vallenatos and seven original compositions with topics such as  “a mosquito that bites you at night and needs to be killed” on El Mosquito and “advice about not mixing it up too much” on El Revuelto (wise advice coming from the ones who fully embrace the “vallenato lifestyle” of living, loving, and learning).

Arturo claims they find inspiration for their songs on a variety of topics including “animals and party animals, monsters and party monsters, Speedy and Gonzalez, The Three Stooges, memory loss and babies having babies.” Surprisingly most of those influences become evident when listening to their music, but more so when joining them at the madcap parties their shows almost always turn into. Some unforgettable parties indeed, even if none of us can remember the details. ¿Remember me from the party? is out on October 9, 2012 on Downtown Pijao.