• TICKETS ON SALE AT WWW.SIGNATURETHEATRE.ORG

NEW YORK CITY - Signature Theatre is pleased to announce a one-week extension for THE PIANO LESSON by August Wilson and directed by Tony Award winner Ruben Santiago-Hudson. The production 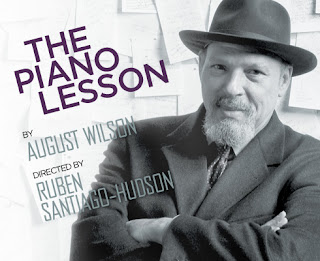 will now play through Sunday, December 16. The production will begin performances on October 30 and open on November 18 in The Irene Diamond Stage at The Pershing Square Signature Center (480 West 42nd Street between 9th and 10th Avenues). Very limited availability remains for the production’s initial run. Tickets during the extension week are $75 each.

Signature returns to the rich body of work of its 2006-07 Playwright-in-Residence August Wilson with a new production of his Pulitzer Prize-winning THE PIANO LESSON. In Pittsburgh’s Hill District in 1936, the Charles family battle their surroundings and each other over their shared legacy – an antique piano. The fourth play of August Wilson’s epic Century Cycle, The Piano Lesson is a stunning and moving drama of family, history, and survival.

To purchase tickets for all Signature productions, call the Signature Theatre Box Office (212-244-7529) or visit signaturetheatre.org.