You have the pretention of directing Medea and all of those beautiful and terrible tragedies as though they dealt with banalities. – Ada

Montreal- Talisman Theatre is privileged to present the Canadian English-language premiere of The Medea Effect, written by Quebecoise playwright Suzie Bastien and translated for Talisman Theatre by Nadine Desrochers, playing at Theatre La Chapelle from October 11-20. Directed by Emma Tibaldo, the

gifted cast stars Éloi ArchamBaudoin as Ugo and Jennifer Morehouse as Ada in this powerful piece stabbed with humour. Translator Nadine Desrochers has risen to the challenge of the text, “The work is built like a delicate score where scenes of controlled behaviour bring us moments of brief respite as emotions swell towards their unthinkable climax.”

An actress, a director, a casting call for Euripides' Medea. Does she get the part? Perhaps, but this is incidental. In The Medea Effect, Ada is a mother who has abandoned her golden child in the midst of an emotional dementia. Ugo's greatest childhood fear has come to pass; he has been abandoned by his demented mother. What surprises us is the shock of recognizing ourselves in the mirrors of these interacting characters. When sonless mother confronts motherless son the atmosphere becomes charged. A play about the role of Euripides' play in the lives of these two characters, The Medea Effect shimmers with the sparks and flashes of profound insight penned over two thousand years ago but refracted and focused through a contemporary lens.

Director Emma Tibaldo has been obsessed with Medea for as long as she can remember, “She is a mysterious hero to me, not because she kills her children, but because she has the courage to accept the repercussions of this unimaginable act.” The Medea Effect explores this suffering, this courage and this monstrous act. It looks at a woman's struggle to reclaim her place in this world.

The Medea Effect refers to Euripides' play but is a modern examination of the tragedy of trauma,

emotional detachment and loss. Tibaldo would like audiences to understand that humanity is fragile, complex and often ugly, but that we are all capable of reaching out and showing great compassion. She clarifies, “We all carry fears around with us that determine how we live our lives, the choices we make, the people we love and hate. If we're lucky, we are capable of recognizing our fears and moving past them.” Moreover, Tibaldo questions the currency of empathy, “What does it mean to connect to someone else's pain? In a world where connecting comes with a click, can we open ourselves to others and meet them as they are, imperfect and damaged?”

Talisman Theatre is renowned for its design-driven productions; Paquette has trained as both an engineer and a stage designer. For The Medea Effect she has chosen simple stone slabs to recall the stage of Ancient Greek drama. She is also working closely with video meister Johnny Ranger (Six Mil Antennas, Mindroots, Moment Factory) on some stunning and evocative video effects conveying the sand and water of the story. Completing the talented design team is David Perreault Ninacs, lighting; Michael Leon, composer; Fruzsina Lanyi, costumes; Matthew Waddell, sound and Rasili Botz, movement. The stage manager is Sara Rodriguez. 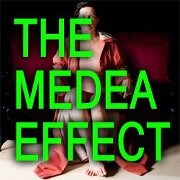