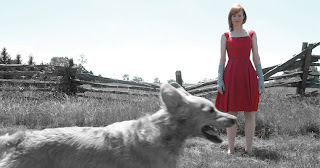 with musical accompaniment and original score by Alison Porter. This acclaimed, virtuosic one-woman-show from one of Canada's most creative talents previews from October 13, opens Wednesday October 24 and closes Thursday, November 22 in Tarragon Theatre's Extra Space.

How does a farm girl in 1950's Ontario escape? She becomes a movie star. And the most proven route to Hollywood in the mid 1950s was to enter as many pageants as possible and to sing, twirl and pivot her way into the hearts of judges.

And so Melody's mother - Peggy Ann Douglas - did just that, as did so many other young gals of her generation - hoping to follow in the footsteps of starlets like Debbie Reynolds and Oprah Winfrey. This transporting memory play looks back at one young, optimistic farm gal, desperate to escape the stall-cleaning, cow-milking, hay-baling drudgery of 1950s life on Rural Route 2. In addition to Peggy's journey for fame, Miss Caledonia also illuminates the lives of one Scottish, Protestant family's will to

survive the harsh farming culture of the times as Johnson portrays numerous characters along the way.

Miss Caledonia straddles the worlds of both comedy and drama, complete with the delightful magic of a live fiddler, in a highly successful marriage of great writing, storytelling and acting.