If you like your humour black, drink this one down -Winnipeg Free Press 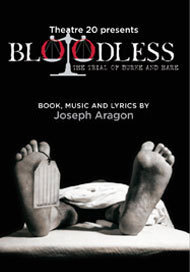 TORONTO - A morbidly entertaining tale of murder and mayhem based on the true story of two 19th century Irish serial killers and their cut-throat pursuit of riches. Directed by Theatre 20 Artistic Director Adam Brazier with Founding Artist Colm Wilkinson as Creative Consultant, the story of Bloodless is told with memorable song, macabre humour and compelling lyrics.

Theatre 20, a new artist-led musical theatre company known for their dedication to evocative Canadian-made and story-driven work, celebrates the first full production in its history, Bloodless: The Trial of Burke and Hare.

Set against a 19th century backdrop in Edinburgh, Scotland, Bloodless revisits the true story of two serial killers who manage to make crime pay - literally - when they create a successful business selling their victims to medical schools.

Winner of the "Best of Fest" award (2009) at the Winnipeg Fringe Festival and the "Harry S. Rintoul" award for Best New Manitoban Play, Bloodless is directed by Theatre 20 Founding Artist and Artistic Director Adam Brazier (Passion, Into The Woods), who made his directorial debut in 2010 with Birdland Theatre's Dora Award-nominated production of Assassins.

Reminiscent of Sweeney Todd, this is a raucous, eerie tale of deceit, murder, and mayhem.