• Please note that this series was previously announced at a different venue - it will now take place at the AGH.
• Ticket available at the door: Regular $25 / Student & Senior $22 / Volunteers & Members FREE
• To exchange previously purchased tickets, please contact info@matapa.ca 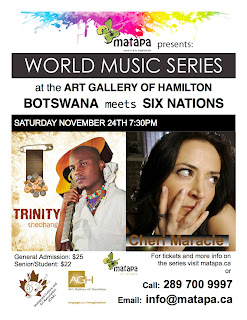 Trinity Mpho
Trinity Mpho, is a songwriter, composer, recording artist, entertainer and stage performer born and raised in Botswana.  Trinity started his music life about a decade ago when he teamed up with a colleague Joel Rebaone ‘Ntsoro’ Keitumele, the then presenter of the Botswana TV program Melodi ya Kgalaletso (Local Gospel show), the musician and comedian.

2011 saw him record his debut album titled “Theohang”. The album has a traditional afrojazz feel and most lyrics he written and sung in his native Sebirwa mother tongue. The album which was released one year ago has been met by a highly  receptive fanbase and is doing very well in the market. This is definitely a collector’s item and certainly something new and fresh our market much needed. Debut performance in Canada.

Cheri Maracle
Cheri Maracle is a multi-award nominated actor/singer/songwriter of Mohawk ancestry. Her debut cd 'Closer to Home', a compilation of jazz, rock & roots infused originals, garnered her 7 nominations within the Aboriginal Music Awards' scene. Cheri is currently penning a follow-up album, and frequently indulges her passion for jazz, performing at various clubs & events within Canada. When not performing music, she can be found acting for stage, film and television. Cheri has performed all across Canada, the U.S and in Europe.

About Matapa
This is just the beginning of a long journey. Our commitment is to bring the best in the world to Hamilton and southern Ontario more broadly. Everyone is welcome to get involved in Matapa as a volunteer or a member.

• Matapa Music & Arts Organization is an incorporated Canadian non-profit organization located in Hamilton, Ontario, Canada.
• The World Music Series will run from November 24th, 2012 to March 30th, 2013 with a focus on celebrating creative connections in Hamilton by bringing artists from nine different cultures and musical traditions together in one series.
• All upcoming dates for the remainder of the series will be announced shortly.